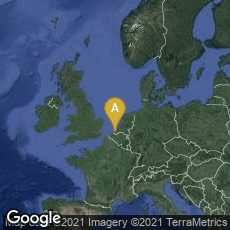 "Crude telescopes and spyglasses may have been created much earlier, but Lippershey is believed to be the first to apply for a patent for his design (beating Jacob Metius by a few weeks), and making it available for general use in 1608. He failed to receive a patent but was handsomely rewarded by the Dutch government for copies of his design. The 'Dutch perspective glass', the telescope that Lippershey invented, could only magnify thrice.

"The first known mention of Lippershey's application for a patent for his invention appeared at the end of a diplomatic report on an embassy to Holland from the Kingdom of Siam sent by the Siamese king Ekathotsarot: Ambassades du Roy de Siam envoyé à l'Excellence du Prince Maurice, arrive a La Haye, le 10. septembr. 1608 ('Embassy of the King of Siam sent to his Excellence Prince Maurice, September 10, 1608'). The diplomatic report was soon distributed across Europe, leading to the experiments by other scientists such as the Italian Paolo Sarpi, who received the report in November, or the English Thomas Harriot in 1609, and Galileo Galilei who soon improved the device.

"One story behind the creation of the telescope states that two children were playing with lenses in his shop. The children discovered that images were clearer when seen through two lenses, one in front of the other. Lippershey was inspired by this and created a device very similar to today's telescope" (Wikipedia article on Hans Lippershey, accessed 03-27-2009).

While Sarpi and Harriot experimented with Lippershey's telescope prior or contemporaneously with Galileo, neither wrote or published on the subject.