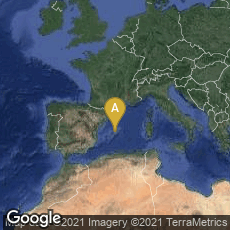 Around 1305 Majorcan writer and philosopher Ramon Llull (Lull) published in his Ars generalis ultima or Ars magna  (the "The Ultimate General Art") a method of combining religious and philosophical attributes selected from a number of lists, which he invented about 1275. With this work Lull became one of the first people to try to make logical deductions in a mechanical, rather than a mental way. It is believed that Llull's inspiration for the Ars magna came from observing Arab astrologers using a mechanical device called a zairja to calculate ideas.

"was intended as a debating tool for winning Muslims to the Christian faith through logic and reason. Through his detailed analytical efforts, Llull built an in-depth theological reference by which a reader could enter in an argument or question about the Christian faith. The reader would then turn to the appropriate index and page to find the correct answer.

"Llull also invented numerous 'machines' for the purpose. One method is now called the Lullian Circle, each of which consisted of two or more paper discs inscribed with alphabetical letters or symbols that referred to lists of attributes. The discs could be rotated individually to generate a large number of combinations of ideas. A number of terms, or symbols relating to those terms, were laid around the full circumference of the circle. They were then repeated on an inner circle which could be rotated. These combinations were said to show all possible truth about the subject of the circle. Llull based this on the notion that there were a limited number of basic, undeniable truths in all fields of knowledge, and that we could understand everything about these fields of knowledge by studying combinations of these elemental truths.

"The method was an early attempt to use logical means to produce knowledge. Llull hoped to show that Christian doctrines could be obtained artificially from a fixed set of preliminary ideas. For example, one of the tables listed the attributes of God: goodness, greatness, eternity, power, wisdom, will , virtue, truth and glory. Llull knew that all believers in the monotheistic religions - whether Jews, Muslims or Christians - would agree with these attributes, giving him a firm platform from which to argue.

"The idea was developed further by Giordano Bruno in the 16th century, and by Gottfried Leibniz in the 17th century for investigations into the philosophy of science.

"Leibniz gave Llull's idea the name ars combinatoria, by which it is now often known. Some computer scientists have adopted Llull as a sort of founding father, claiming that his system of logic was the beginning of information science" (Wikipedia article on Ramon Llull, accessed 04-02-2009).