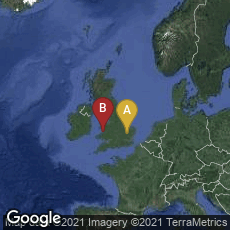 Ross D. King, Jem Rowland and 11 co-authors from the Department of Computer Science at Aberystwyth University, Aberystwyth, Wales, and the University of Cambridge, published "The Automation of Science," Science 3 April 2009: Vol. 324. no. 5923, pp. 85 - 89 DOI: 10.1126/science.1165620. In this paper they described a Robot Scientist which the researchers believed was the first machine to have independently discovered new scientific knowledge. The robot, called Adam, was a computer system that fully automated the scientific process.

"Prof Ross King, who led the research at Aberystwyth University, said: 'Ultimately we hope to have teams of human and robot scientists working together in laboratories'. The scientists at Aberystwyth University and the University of Cambridge designed Adam to carry out each stage of the scientific process automatically without the need for further human intervention. The robot has discovered simple but new scientific knowledge about the genomics of the baker's yeast Saccharomyces cerevisiae, an organism that scientists use to model more complex life systems. The researchers have used separate manual experiments to confirm that Adam's hypotheses were both novel and correct" (http://www.eurekalert.org/pub_releases/2009-04/babs-rsb032709.php).

"The basis of science is the hypothetico-deductive method and the recording of experiments in sufficient detail to enable reproducibility. We report the development of Robot Scientist "Adam," which advances the automation of both. Adam has autonomously generated functional genomics hypotheses about the yeast Saccharomyces cerevisiae and experimentally tested these hypotheses by using laboratory automation. We have confirmed Adam's conclusions through manual experiments. To describe Adam's research, we have developed an ontology and logical language. The resulting formalization involves over 10,000 different research units in a nested treelike structure, 10 levels deep, that relates the 6.6 million biomass measurements to their logical description. This formalization describes how a machine contributed to scientific knowledge" (Abstract in Science).