Marguerite d'Autriche, who was married to briefly to John, Prince of Asturias before his death in 1497. 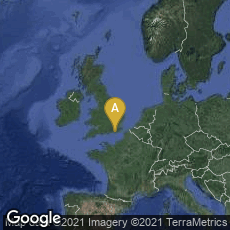 Produced sometime before 1501, probably during or after 1497, the front portion contains a brief address or dedication to the Princess of Spain. Margaret of Austria (Marguerite d’Autriche) was the Princess of Spain by marriage during 1497-1501. “On the basis of 15th century musical and literary material it is generally concluded that the dances of both manuscripts [Toulouze and Brussels] are to be situated in the middle of the 15th century”. (Lieven Baaert and Veerle Fack, “Les Basses Danses de Marguerite d’Autriche”)

The original manuscript is preserved in the Bibliothèque royale Albert Ier, Bruxelles, (Ms. 9085).  In November 2013 a digital facsimile was available from the Library of Congress website at this link.