Viewing a facsimile of the Codex Gigas (Devil's Bible) in the Czech Republic. 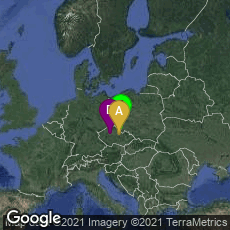 The original Codex Gigas; the opening with the portrait of the devil. National Library of Sweden. 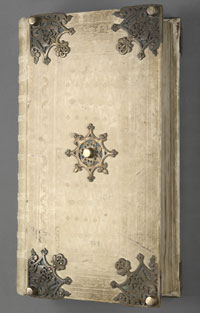 The largest extant medieval manuscript, the Codex Gigas, or Giant Codex, was created in the early 13th century in the Benedictine monastery of Podlažice in Bohemia (now Czech Republic).  It is also known as the Devil's Bible due to its full-page illumination depicting the devil, and the legend surrounding its creation.

". . .  . At 92 cm (36.2in.) tall, 50 cm (19.7in.) wide and 22 cm (8.6in.) thick it is the largest known medieval manuscript. It initially contained 320 vellum sheets, though eight of these were subsequently removed. It is unknown who removed the pages or for what purpose but it seems likely that they contained the monastic rules of the Benedictin es. The codex weighs nearly 75 kg (165 lbs.) and the vellum is composed of calf skin (or donkey according to some sources) from 160 animals.

"The Codex includes the entire Latin Vulgate version of the Bible, except for the books of Acts and Revelation, which are from a pre-Vulgate version. Also included are Isidore of Seville's encyclopedia Etymologiae, Josephus' Antiquities of the Jews, Cosmas of Prague's Chronicle of Bohemia, various tractates (from history, etymology and physiology), a calendar with necrologium, a list of brothers in Podlažice monastery, magic formulae and other local records. The entire document is written in Latin. Illustration of the devil, page 290. Legend has it the codex was created by a monk who sold his soul to the devil. 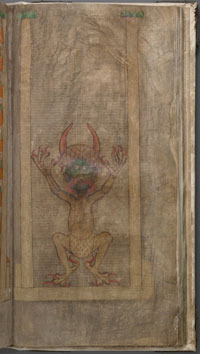 "The manuscript includes illuminations in red, blue, yellow, green and gold. Capital letters are elaborately illuminated, frequently across the entire page. The codex has a unified look as the nature of the writing is unchanged throughout, showing no signs of age, disease or mood on the part of the scribe. This may have led to the belief that the whole book was written in a very short time. But scientists are starting to believe and research the theory that it took over 20 years to complete" (Wikipedia article on Codex Gigas, accessed 04-07-2009).

Records in the manuscript end in the year 1229. The codex was later pledged to the Cistercians Sedlec monastery and then bought by the Benedictine monastery in Břevnov. From 1477-1593 it was kept in the library of a monastery in Broumov until it was taken to Prague in 1594 to form a part of the collections of Holy Roman Emperior Rudolf II.

In 1648, at the end of the Thirty Years' War, the collection of Rudolf II was plundered by the Swedish army.  Since 1649  the manuscript has been preserved in the National Library of Sweden in Stockholm.