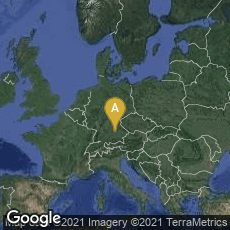 The Bird's Head Haggadah, One of the Oldest Surviving Ashkenazi Illuminated Manuscripts One of the oldest surviving Ashkenazi illuminated manuscripts, The Bird's Head Haggadah, produced in Southern Germany about 1300, takes its name from the birdlike human figures illustrated in its margins. It is preserved in the Israel Museum, Jerusalem.

"This motif is apparently related to the biblical (Second Commandment) prohibition against creating graven images. In the Birds' Head Haggadah, discovered by Jewish art historian Bezalel Narkiss in 1946, the realistic human figure is avoided by providing it with the head and beak of a bird, but also by distorting or hiding it — with helmets, bulbous noses, and blank faces.

"The adult males are shown wearing on their birds' heads the conical 'Jew's Hat' which was compulsory for Jews in Germany and other lands of the Holy Roman Empire from 1215 until the late Middle Ages. This early S. German haggadah is richly illustrated with biblical, eschatological and ritual scenes - the Israelites crossing the Red Sea, Moses receiving the Tablets of the Law, the manna and quails falling from the sky, and the preparation of matzah for Passover. It written by the scribe Menahem, as indicated by marked letters in the text.

"The representation of human figures with animal heads is typical of South German medieval manuscripts. In the 12th-century Ashkenazi community in southern Germany, several codifiers forbade the realistic representation of human figures, yet ruled that it was permissible to draw human figures without faces. Rabbi Ephraim of Regensburg (12th cent.) permitted the painting of animals and birds, and of two-dimensional humans, as long as they had no faces. Though he believed that as prayerbook illustrations they were a distraction , he said they did not violate the Second Commandment because they were not concrete or sculptural.

"The great French scholar, Rashi, was more lenient; he knew of and apparently did not object to wall frescoes (presumably in the home) depicting biblical scenes, such as the fight between David and Goliath. In 12th-century France, in general, many Torah scholars discussed and permitted even the three-dimensional representation of the human form, provided that it was incomplete.

"When the art of illuminating Hebrew manuscripts emerged in Northern Europe not later than the 13th century, the inhibition as regards depicting the realistic or complete human form lingered. By presenting the human figures with animal faces and bird heads, the illustrated Hebrew manuscripts retained at least marginally the traditional prohibition against representational art" (Jewish Heritage Online Magazine, accessed 04-07-2009).