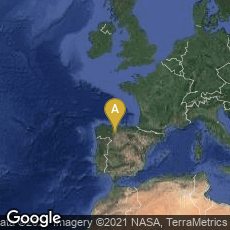 Frontispiece showing Christ and the Evangelists from the León Bible of 960.

The Visigothic-Mozarabic Bible of St. Isidore, also known as the Biblia de León was completed in the Monastery of Valeránica, in Tordómar, Spain on June 19, 960 by Iberian Christians who lived under Moorish Muslim rule in Al-Andalus, the portions of the Iberian Peninsula governed by Muslims at various times in the period between 711 and 1492. It is considered the best-documented Mozarabic bible as it includes the names and portraits of its scribe, Sancho, and its miniaturist, Florencio.  The codex contains all the books of the Old and New Testaments, as well as prologues, biblical commentaries and other texts, written in lowercase visigothic-mozarabic lettering with initial capital letters in the interlaced Saxon style and decorated with biblical scenes and roundels. Annotated in both Arabic and Latin, it is preserved in the  Basílica de San Isidoro, León.

On April 20, 2009 the following notice appeared in Artdaily.org:

"Several experts from the world of art have stated that there is an extraordinary likeness between the figures that appear in the Guernica painted by the artist and those in a Mozarabic Bible from the 10th Century, which is housed in the Cathedral in Leon, to the point where it has been discarded that it was fruit of a coincidence. This Bible was exhibited in Barcelona in 1929 and in Paris in 1937, a time when the Cubist genius could have discovered the expressionist drawings that appear in the medieval text, according to the head of the Cathedral of Leon Museum, Máximo Gómez Rascón.

"Several experts consulted by news agency EFE arrived at the same conclusion and base it on the relative aspects of the double view, in front and to the side, of the figures in the painting, as well as in the horse and the bull.

"In this way, the director of the museum, has explained that the similarities are seen especially in the bull, which in the Bible symbolizes Saint Luke and which is “almost exactly” as the one that Picasso painted on Guernica.

"The similarity also manifests itself in the horse’s head that appears in the painting and, to a lesser extent, in the faces of the persons, as well as some of the profiles that also allude to the ones appearing in the bible.

"It has been pointed out that in the bible there is also a lion, with its tongue out, whose face and expression are very similar to the horse that appears in Guernica, or to the one that has a type of knife coming out of its mouth.

"The head of the museum has discarded the idea that the similarities are fruit of a coincidence and is convinced that Picasso “without a doubt” had seen this bible, which was created by Deacon John in 920 [sic] and written in parchment with Visigothic letters.

"Even though that during those times codices were illustrated with those kinds of symbols, Gómez Rascón has emphasized the singularity with the one in Leon, one of the most important from that era.

"Painter Benito Escarpizo, former professor from the School of Applied Arts in Leon, is completely convinced: 'If the similarities are enormous in the painting, they are even greater in the sketches' " (http://www.artdaily.org/index.asp?int_sec=2∫_new=30316).