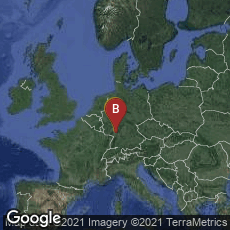 Karl von Drais on his original Laufmaschine, or draisine, the earliest two-wheeler, in 1819. Arist unknown.

In 1817 German inventor Karl Drais invented the Laufmaschine ("running machine"), later called the velocipede, draisine (English) or "draisienne" (French), or nick-named, dandy horse. This incorporated the two-wheeler principle that is basic to the bicycle and motorcycle and represented the beginning of mechanized personal transportation. Drais took his first recorded ride on the Laufmachine from Mannheim to Rheinau, now a suburb of Mannheim on June 12, 1817.

"The dandy-horse was a two-wheeled vehicle, with both wheels in-line, propelled by the rider pushing along the ground with the feet as in regular walking or running. The front wheel and handlebar assembly was pivoted to allow steering.

"Several manufacturers in France and England made their own dandy-horses during its brief popularity in the summer of 1819 -- most notably, Denis Johnson of London, who used an elegantly curved wooden frame which allowed the use of larger wheels. Riders preferred to operate their vehicles on the smooth pavements instead of the rough roads, but their interactions with pedestrians caused many municipalities to enact laws prohibiting their use. A further drawback of this device was that it had to be made to measure, manufactured to conform with the height and the stride of its rider, as none of its manufacturers are known to have built an adjustable version. After its brief moment in the limelight, the dandy-horse quickly faded into oblivion.

"However, in the 1860s in France, the vélocipède bicycle was created by attaching rotary cranks and pedals to the front-wheel hub of a dandy-horse" (Wikipedia article on Dandy horse, accessed 04-25-2009).