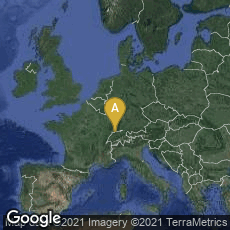 The Helvetica Typeface Debuts Under a Different Name "The aim of the new design was to create a neutral typeface that had great clarity, had no intrinsic meaning in its form, and could be used on a wide variety of signage.

"In 1960, the typeface's name was changed by Haas' German parent company Stempel to Helvetica — derived from Confoederatio Helvetica, the Latin name for Switzerland — in order to make it more marketable internationally" (Wikipedia article on Helvetica, accessed 04-26-2009).

In 2007 Gary Hustwit produced Helvetica a "feature-length independent film about typography, graphic design and global visual culture. It looks at the proliferation of one typeface (which recently celebrated its 50th birthday in 2007) as part of a larger conversation about the way type affects our lives" (from the superb website for the film, accessed 04-26-2009). In December 2013 several clips from the film were available at this link.