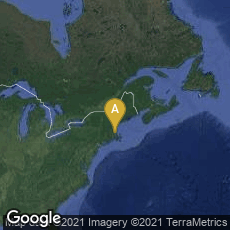 In 1876 Charles Ammi Cutter, librarian at the Boston Athenaeum, published Rules for a Printed Dictionary Catalogue. This was the last library cataloguing code written by one person.

"In his prefatory note, Cutter claimed to be the first investigator of the 'first principles of cataloguing' and the first to 'set forth the rules in a systematic way.' One of the principles he expostulated was that 'the convenience of the user should be preferred to the ease of the cataloguer.' Cutter urged catalogers to do such things as select the customary use of the names of subjects and the best known form of the author's name so that this goal might be fulfilled. The code's introduction lists objectives and means to bring about this convenience. These objectives and means have been studied for years by students of cataloging code history. Exactly how the 'convenience of the user' would be determined Cutter did not specify; he himself, it would seem, relied upon his own experience rather than any systematic study of user needs or behavior. No one else did such a study during these years either: such things as survey research and transaction log analysis were twentieth century phenomena" (J. R. Hufford, The Pragmatic Basis of Catalog Codes: Has the User Been Ignored? [2007] 29]