Image Source: www.stgallplan.org
Key to the Plan of St. Gall from the Carolingian Culture at Reichenau & St. Gall website. 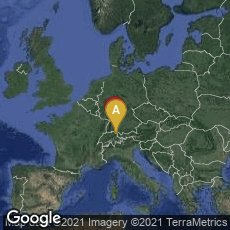 Codex Sangallensis 1092, The Plan of Saint Gall (St. Gall), "the only surviving major architectural drawing from the roughly 700-year period between the fall of the Roman Empire and the 13th century," was created between 820 and 830 CE.

The plan, which includes a library, probably depicts an ideal Benedictine monastic compound,

"including churches, houses, stables, kitchens, workshops, brewery, infirmary, and even a special house for bloodletting. . . . much has been learned about medieval life from the Plan. The absence of heating in the dining hall, for instance, was not an oversight but was meant to discourage excessive enjoyment of meals. In the quarters for the 120-150 monks, their guests, and visitors, the ratio of toilet seats was better than what modern hygenic codes would prescribe."

In 1979 the University of California Press published a monumental three-volume study in folio format by Walter Horn and Ernest Born entitled The Plan of St. Gall. A Study of the Architecture & Economy of, & Life in a Paradigmatic Carolinian Monastery.  From the standpoint of book design and production this work with more than 1000 pages was one of the most spectacular scholarly publications of the late 20th century. Three years later, in 1982 to accompany an exhibition concerning the plan, the U.C. Press issued another spectacular, but much thinner volume of 100 pages, The Plan of St. Gall in Brief: An overview based on the 3-volume work. . . including selected facsimile illustrations color and black and white, and also a Note on Architectural Scale Models, with illustrations in color of the Reconstruction Scale Model of the Monastery of the Pllan of St. Gall, as interpreted by Horn and Born, and crafted in bassword by Carl Bertil Lund.

By 2012 a website at www.stgallplan.org was built to place the Plan of St. Gall in its widest cultural context. Aspects of this website were summarized by Richard Matthew Pollard and Julian Hendrix in "Digital Devotion from Carolingian Reichenau and St. Gall," Digital Philology: A Journal of Medieval Cultures I (2012) 292-302. | 10.1353/dph.2012.0021, from which I quote:

"A long-term digitization project ( www.stgallplan.org) to bring the Carolingian plan for the monastery of St. Gall in Switzerland to life has earned justified praise for its impact. The project calls attention to and increases understanding of Carolingian monastic life at one of the great houses of the time. Whether the library was ever intended to be constructed or whether it was an imaginative conceptualization of an ideal library is immaterial to the light the project has shed on Carolingian spirituality. This article both introduces the project and demonstrates how digitization of manuscripts can increase the data available for studying devotion and the religious emotions that it entailed.

"There are few single documents more important for the history of medieval art, architecture, monasticism, and, as we hope to show in this essay, devotional emotions, than the famous drawing known as the Plan of St. Gall. This document, now preserved at the monastery Stiftsbibliothek in Switzerland, was drawn up for abbot Gosbert of St. Gall by two scribes of the sister monastery of Reichenau, on Lake Constance, around 820. An early and accomplished piece of technical drawing, the Plan measures 112 by 77.5 cm (slightly smaller than A0 paper, for those keeping track) and is made of five pieces of parchment sewn together. It depicts a large monastery complex, centred around an elaborate church, with cloister and refectories, scriptorium and library, alongside breweries, bakeries, a mill, and even a shoemaker's shop. We do not know why exactly it was drawn up, but the dedication, probably written by Haito, abbot of Reichenau, indicates that it was given to Gosbert so that he might 'exercise your ingenuity and recognize my devotion.'  Gosbert was undertaking building projects at the time, and so the plan may have been prompted by Gosbert's desire to begin construction at St. Gall. It is clear, however, that St. Gall was not built from this plan, though some of the buildings there might have been inspired by it (Jacobsen). It is perhaps better to think of the Plan as a very detailed sketch of 'the ideal monastery' in the Carolingian imagination, where the whole world is reordered to the service of God (Dey 1940).

"It is an unfailing axiom of medieval history that the ease of access to a document declines in proportion to its importance. This, and the Plan's unwieldy size, has made it a difficult resource to use. Several years ago, therefore, Patrick Geary, of UCLA, and Bernard Frischer, of the University of Virginia, conceived of a project to make the Plan, and ancillary bibliography and analysis of it, accessible in virtual form. With the cooperation of the St. Gall librarians, extremely high-resolution pictures were taken of the Plan, and displayed using a special java applet, allowing the images to be panned, rotated, and zoomed. The result is actually much more useful and detailed than what one could experience with the large and unwieldy Plan.  In this first phase of the project, ancillary documents were added alongside to help contextualize the monastic environment that produced the Plan. Initially this focused on material culture: for instance, images of hundreds of Carolingian objects (pots, brooches, carvings, etc.) were put online to give a sense of the things used and produced in a monastery like that represented in the Plan. The second phase of the project aims to give a sense of the intellectual environment that produced the Plan by giving access to the books that were present at Reichenau (and St. Gall) when the Plan was produced. The project has acquired digital reproductions of 168 manuscripts present at Carolingian Reichenau and St. Gall. These are being presented in the same, high-resolution, zoomable form as the Plan, and are paired with updated descriptions."