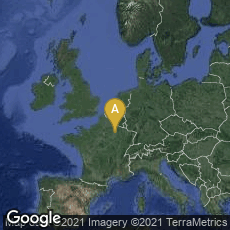 In 451 Roman General Flavius Aetius and Visigothic King Theodoric I defeated the Huns under the command of Attila at the Battle of the Catalaunian Plains (or Fields), also called the Battle of Châlons sur Marne (now Châlons-en-Champagne).

Of this battle Gibbon wrote, "Attila's retreat across the Rhine confessed the last victory which was achieved in the name of the Western Roman Empire."

"John Julius Norwich, the historian known for his works on Venice and on Byzantium, said of the battle of Chalons:

" 'It should never be forgotten that in the summer of 451 and again in 452, the whole fate of western civilization hung in the balance. Had the Hunnish army not been halted in these two successive campaigns, had its leader toppled Valentinian from his throne and set up his own capital at Ravenna or Rome, there is little doubt that both Gaul and Italy would have been reduced to spiritual and cultural deserts.

"He goes on to say that though the battle in 451 was 'indecisive insofar as both sides sustained immense losses and neither was left master of the field, it had the effect of halting the Huns' advance.'

"There are a couple of reasons why this combat has kept its epic importance down the centuries. One is that—ignoring the Battle of Qarqar (Karkar), which was forgotten at this time—this was the first significant conflict that involved large alliances on both sides. No single nation dominated either side; rather, two alliances met and fought in surprising coordination for the time. Arthur Ferrill, addressing this issue, goes on to say:

"After he secured the Rhine, Attila moved into central Gaul and put Orleans under siege. Had he gained his objective, he would have been in a strong position to subdue the Visigoths in Aquitaine, but Aetius had put together a formidable coalition against the Hun. Working frenetically, the Roman leader had built a powerful alliance of Visigoths, Alans and Burgundians, uniting them with their traditional enemy, the Romans, for the defense of Gaul. Even though all parties to the protection of the Western Roman Empire had a common hatred of the Huns, it was still a remarkable achievement on Aëtius' part to have drawn them into an effective military relationship.

"Addressing Attila's fearsome reputation, and the importance of this battle, Gibbon noted that it was from his enemies we hear of his terrible deeds, not from friendly chroniclers, emphasizing that the former had no reason to elevate Attila's reign of terror, and the importance of the Battle of Chalons in proving Attila to be merely mortal and defeatable" (Wikipedia article on Battle of the Catalaunian Plains, accessed 05-10-2009).