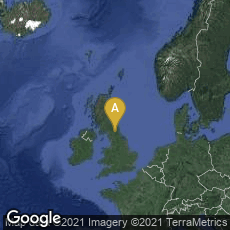 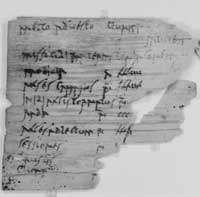 The Vindolanda Writing Tablets, excavated from the Roman fort at Vindolanda, one of the main military posts on the Northern frontier of Britain before the building of Hadrian's Wall, were written in carbon ink on wafer-thin slices of wood around 100 CE. The tablets were excavated in 1973 near the modern village of Bardon Mill from waterlogged conditions in rubbish deposits in and around the commanding officer's residence. Experts have identified the handwriting of hundreds of different people in these documents. They confirm that the officers of Vindolanda were most certainly literate, and that some soldiers in the ranks may also have been literate.

"These, and hundreds of other fragments which have come to light in subsequent excavations, are the oldest surviving handwritten documents in Britain.

"Most of the tablets are official military documents relating to the auxiliary units stationed at the fort. However, others are private letters sent to or written by the serving soldiers. The content is fascinating, giving us a remarkable insight into the working and private lives of the Roman garrison. They also display a great variety of individual handwriting, which adds to our knowledge of Roman cursive writing around AD 100.

"The tablets are not made of wood and wax, previously thought to be the most popular medium for writing in the Roman world apart from papyrus. Instead they are wafer thin slices of wood, written on with carbon ink and quill-type pens. Even after specialised conservation the exacavated tablets are fragile and require a carefully controlled environment" (British Museum, Our Top Ten British Treasures, accessed 05-10-2009).