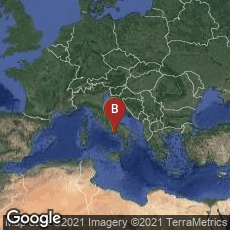 Portrait of Terentius Neo, the woman holding wax tablets and a stylus, the man holding a papyrus roll.

A fresco of a Pompeian couple with stylus, wax tablets, and papyrus roll from about 75 CE, found in the House of Terentius Neo, shows a man holding a papyrus scroll and a woman holding a stylus to her lips for writing on the wax tablets that she holds in her other hand. This fresco, which is sometimes called Portrait of Terentius Neo, is one of several surviving Roman portraits depicting the symbols of literacy.

"This couple, who did not come from the very highest ranks of the Pompeian aristocracy, probably chose to be depicted in this way as a mark of their status—they belonged to the ranks of those who were literate, and they wished to display the fact. In this sense, the portrait is evidence that literacy was far from universal in Roman Pompeii. But it is none the less an impressive fact, typical of the Roman world and difficult to parallel before modern times, that a provincial couple should have chosen to be painted in a way that very specifically celebrated a close relationship with the written word, on the part of both the man and his wife" (Ward-Perkins, The Fall of Rome and the End of Civilization [2005] 162-63, plate 7.10).

The fresco is preserved in the Museo Archeologico Nazionale, Naples.