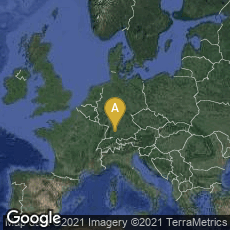 The Lionheaded Figurine or Löwenmensch.

The so-called Lionheaded Figurine, a zoomorphic /anthropomorphic sculpture 29.6 cm high, 5.6 cm wide and 5.9 cm thick. carved out of mammoth ivory, was discovered in 1939 in a cave named Stadel-Höhle im Hohlenstein in the Lonetal, Swabian Alps, Germany.

"Due to the beginning of the Second World War, it was forgotten and only rediscovered thirty years later. The first reconstruction revealed a humanoid figurine without head. During 1997 through 1998 additional pieces of the Sculpture were discovered and the head was reassembled and restored."

"After this artifact was identified, a similar, but smaller, lion-headed sculpture was found, along with other animal figures, in another cave in the same region of Germany. This leads to the possibility, that the lion-figure played an important role in the mythology of humans of the early Upper Paleolithic"(Wikipedia article on Lion man, accessed 05-14-2009).

The figurine is preserved in the Ulmer Museum in Ulm, Germany, which maintains a website for the figurine.