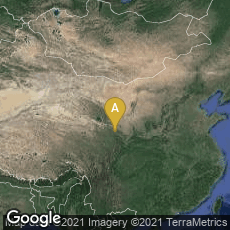 The Invention of Movable Type in China In the opening ceremony of the 2008 Olympics in Beijing dancers performed in boxes of varying size with letters on top representing the invention of movable type in China--one of the four great inventions of early China: paper, printing, including printing by movable type, the compass, and gunpowder.

Between 1041 and 1048 the Chinese alchemist Bi Sheng (畢昇) invented movable type made of an amalgam of clay and glue hardened by baking, similar to Chinese porcelain. He composed texts by placing the types side by side on an iron plate coated with a mixture of resin, wax, and paper ash. Because the Chinese alphabet is primarily pictographic and ideographic rather than alphabetic, movable type did not advance in China at this time.

"Although the use of assembling individual characters to compose a piece of text had its origins in antiquity, Bi Sheng's methodical innovation was something completely revolutionary for his time. Shen Kuo noted that the process was tedious if one only wanted to print a few copies of a book, but if one desired to make hundreds or thousands of copies, the process was incredibly fast and efficient. Beyond Shen Kuo's writing, however, nothing is known of Bi Sheng's life or the influence of movable type in his lifetime.

"Although the details of Bi Sheng's life were scarcely known, Shen Kuo wrote:

" 'When Bi Sheng died, his fount of type passed into the possession of my followers (i.e. one of Shen's nephews), among whom it has been kept as a precious possession until now.

"There are a few surviving examples of books printed in the late Song Dynasty using movable type printing. This includes Zhou Bida's Notes of The Jade Hall (玉堂雜記) printed in 1193 using the method of baked-clay movable type characters outlined in the Dream Pool Essays" (Wikipedia article on Shen Kuo, accessed 01-25-2012).