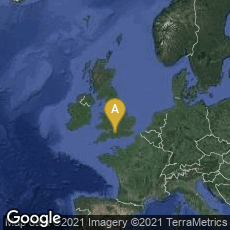 The Oldest Surviving Copy of the Anglo-Saxon Chronicle: The First Continuous History Written by Europeans in their Own Language 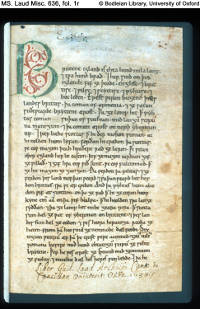 About 890 Alfred the Great, King of Wessex, an Anglo-Saxon kingdom in south-west England, ordered monks to compile the Anglo-Saxon Chronicle, a collection of annals narrating the history of the Anglo-Saxons and their settlement in Britain. The original manuscript of the Chronicle was probably created in Wessex. Copies were were distributed to monasteries across England, where they were independently updated. In one case, the Chronicle was still being actively updated in 1154.

Much of the information in these documents consists of rumors of events that happened elsewhere and may be unreliable. However for some periods and places, the chronicle is the only substantial surviving source of information. "After the original chronicle was compiled, copies were kept at various monasteries and were updated independently. Sometimes with items important to the locals, such as the fertility of the harvest or the paucity of bees, would be eagerly recorded, whereas distant political events could be overlooked. A combination of the individual annals allows us to develop an overall picture, a document that was the first continuous history written by Europeans in their own language."

There are nine surviving manuscripts of the Chronicle, of which eight are written entirely in Anglo-Saxon, while the ninth is in Anglo-Saxon with a translation of each annal into Latin. The oldest (Corpus Christi MS 173) is known as the Winchester Chronicle or the Parker Chronicle, after Matthew Parker who once owned it. This manuscript, preserved in the Parker Library at Corpus Christi College, Cambridge, dates from the actual time of compilation—the last decade of the ninth century. A digital facsimile of Corpus Christi MS 173 is available from Parker Library On the Web at this link. With the digital facsimile is a highly informated annotation concerning the manuscript, its contents, and its provenance.