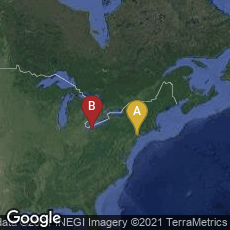 Vinge at the Computers, Freedom and Privacy Conference (CFP) 2006

"Within thirty years, we will have the technological means to create superhuman intelligence. Shortly thereafter, the human era will be ended."

"Vinge refines his estimate of the time scales involved, adding, 'I'll be surprised if this event occurs before 2005 or after 2030.

"Vinge continues by predicting that superhuman intelligences, however created, will be able to enhance their own minds faster than the humans that created them. 'When greater-than-human intelligence drives progress," Vinge writes, "that progress will be much more rapid.' This feedback loop of self-improving intelligence, he predicts, will cause large amounts of technological progress within a short period of time" (Wikipedia article on Technological singularity, accessed 05-24-2009).