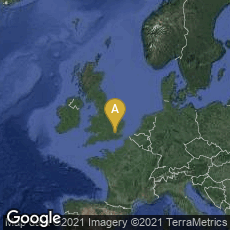 Melbourne-Cooper continued to produce shorts of animated matchsticks until at least 1914 when his Animated Matches-Football was created, from which this image is taken.

Matches: An Appeal, an English short subject by Arthur-Melbourne Cooper, developed for the Bryant and May Matchsticks company of Bow, London in December 1899, may be the earliest surviving example of stop-motion animation. It involved stop-motion animation of wired-together matches writing a patriotic call to action on a blackboard.

"The film contains an appeal to send money to Bryant and May who would then send matches to the British troops which were fighting in the Boer War in South Africa. It was shown in December 1899 at The Empire Theatre in London. This film is the earliest known example of stop-motion animation. Little puppets, constructed of matchsticks, are writing the appeal on a black wall. Their movements are filmed frame by frame, movement by movement. With this film Britain was 6 or 7 years ahead of animation pioneers in France and the United States" (Wikipedia article on Arthur Melbourne-Cooper, accessed 02-15-2012).