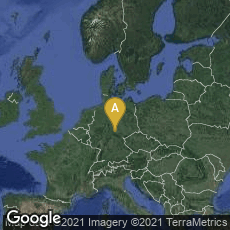 Kurt Lasswitz Writes the Earliest Fictional Account of a Universal Library, Foreshadowing the Virtual Library on the Internet In 1901 German scientist, philosopher and science fiction writer Kurt Lasswitz at Gotha, Germany published a story entitled Die Universalbibliothek (The Universal Library) describing a library which was universal in the sense that it not only contained all existing written works, but all possible written works.

"In 1901 Kurd Lasswitz wrote a short story, 'The Universal Library,' elaborated upon by Jorge Luis Borges as 'The Library of Babel' in 1941. 'When it was proclaimed that the Library contained all books, the first impression was one of extravagant happiness,' Borges explained. 'All men felt themselves to be the masters of an intact and secret treasure. There was no personal or world problem whose solution did not exist.' Borges described the library in magical tones, whereas Lasswitz, a mathematician as well as a philosopher, got down to practical details. 'You say that everything will be in the library? The complete works of Goethe? The Bible? The works of all the classical philosophers?" Professor Wallhausen's companion, the magazine editor Max Burkel, asked. 'Yes, and with all the variations in wording nobody has thought up yet. You'll find the lost works of Tacitus and their translations into all living and dead languages. Furthermore, all of my and my friend Burkel's future works, all forgotten and still undelivered speeches in all parliaments, the official version of the Universal Declaration of Peace, the history of all the subsequent wars...'

" 'I'm going to subscribe right now,' Burkel exclaimed. 'This will furnish me with all the future volumes of my magazine; I won't have to read manuscripts any more!' Professor Wallhausen decided to calculate how many volumes (a large but finite number) the universal library would have to contain.  ' 'Will you — ' he turned to his daughter — 'hand me a sheet of paper and a pencil from my desk?' Max Burkel added, 'Bring the logarithm table too.' After a few minutes Wallhausen had the result, and wrote it down: 10^2,000,000.

" 'You make your life easy,' remarked Mrs. Wallhausen. 'Why don't you write it down in the normal manner?'

" 'Not me. This would take me at least two weeks, without time out for food and sleep. If you printed that figure, it would be a little over two miles long.'

' 'What is the name of that figure?' the daughter wanted to know.

"It has no name," Wallhausen replied.

"The number of books in the Universal Library lies somewhere between a googol (10^100) and a googolplex (10^googol), numbers which were named, by 8-year-old Milton Sirotta and his uncle Edward Kasner, in 1938. In Lasswitz's tale, Wallhausen went on to demonstrate that there would not be enough room in the visible universe to contain all possible printed books. Editor Max Burkel's hope for the 'elimination of the author from the literary business' was doomed" (Edge: The Third Culture, "The Universal Library" by George Dyson, 11.30.05, accessed 05-25-2009).