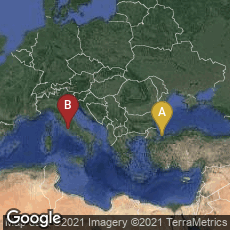 Vegetius, Epitoma rei militaris, [Cologne, circa 1475] from the copy in the Bayerische Staatsbibliothek.

"The latest event alluded to in his Epitoma rei militaris is the death of the Emperor Gratian (383); the earliest attestation of this work is a subscriptio by one Flavius Eutropius, writing in Constantinople in the year 450, which appears in one of two families of manuscripts, suggesting that a bifurcation of the manuscript tradition had already occurred. Despite Eutropius' location in Constantinople, the scholarly consensus is that Vegetius wrote in the Western Empire. Vegetius dedicates his work to the reigning emperor, who is identified as Theodosius, ad Theodosium imperatorem, in the manuscript family that was not edited in 450; the identity is disputed: some scholars identify him with Theodosius the Great, while others . . . identify him with the later Valentinian III, dating the work 430-35.

"Vegetius's epitome mainly focuses on military organization and how to react to certain occasions in war. Vegetius explains how one should fortify and organize a camp, how to train troops, how to handle undisciplined troops, how to handle a battle engagement, how to march, formation gauge, and many other useful methods of promoting organization and valour in the legion.

"As G. R. Watson observes, Vegetius' Epitoma 'is the only ancient manual of Roman military institutions to have survived intact.' Despite this, Watson is dubious of its value, for he 'was neither a historian nor a soldier: his work is a compilation carelessly constructed from material of all ages, a congeries of inconsistencies.' These antiquarian sources, according to his own statement, were Cato the Elder, Cornelius Celsus, Frontinus, Paternus and the imperial constitutions of Augustus, Trajan, and Hadrian.

"The first book is a plea for army reform; it vividly portrays the military decadence of the Late Roman Empire. Vegetius also describes in detail the organisation training and equipment of the army of the early Empire. The third contains a series of military maxims, which were (rightly enough, considering the similarity in the military conditions of the two ages) the foundation of military learning for every European commander from William the Silent to Frederick the Great. When the French Revolution and the "nation in arms" came into history, we hear little more of Vegetius. Some of the maxims may be mentioned here as illustrating the principles of a war for limited political objectives with which he deals:

" * 'the main and principal point in war is to secure plenty of provisions for oneself and to destroy the enemy by famine. Famine is more terrible than the sword.'

" * 'No man is to be employed in the field who is not trained and tested in discipline.'

" * 'It is better to beat the enemy through want, surprises, and care for difficult places (i.e., through manoeuvre) than by a battle in the open field.'

" * 'Let him who desires peace prepare for war.'

"These are maxims that have guided the leaders of professional armies for most of recorded history, as witness the Chinese generals Sun Tzu and Wu. His 'seven normal dispositions for battle,' once in honor among European students of the art of war, are equally useful if applied to more modern conditions. His book on siegecraft is important as containing the best description of Late Empire and Medieval siegecraft. From it, among other things, we learn details of the siege engine called the onager, which afterwards played a great part in sieges, until the development of modern cannonry. The fifth book is an account of the materiel and personnel of the Roman navy.

"The author of the 1911 Encyclopaedia Britannica article states that 'In manuscript, Vegetius's work had a great vogue from its first advent. Its rules of siegecraft were much studied in the Middle Ages.' N.P. Milner observes that it was 'one of the most popular Latin technical works from Antiquity, rivalling the elder Pliny's Natural History in the number of surviving copies dating from before AD 1300.' It was translated into English, French (by Jean de Meun [1284] and others), Italian (by the Florentine judge Bono Giamboni [circa 1250] and others), Catalan, Spanish, Czech, and Yiddish before the invention of printing. The first printed editions are ascribed to Utrecht (1473), Cologne (1476), Paris (1478), Rome (in Veteres de re mil. scriptores, 1487), and Pisa (1488). A German translation by Ludwig Hohenwang appeared at Ulm in 1475." (Wikipedia article on Publius Flavius Vegetius Renatus, accessed 05-26-2009).

"English translations [of Vegetius] precede printed books. Manuscript 18A.Xii in the Royal Library, written and ornamented for Richard III of England, is a translation of Vegetius. It ends with a paragraph starting: "Here endeth the boke that clerkes clepethe in Latyne Vegecii de re militari." The paragraph goes on to date the translation to 1408. The translator is identified in Manuscript No. 30 of Magdalen College, Oxford, as John Walton, 1410 translator of Boethius." (Wikipedia article on De re militari, accessed 05-26-2009).

Vegetius' work may frequently be confused with the work with the same title, De re militari, written by the 15th century humanist Roberto Valturio (Valturius). That work, first published in print in 1472, was the first printed work on technology and the first book with informational rather than decorative illustrations. Vegetius' Epitoma rei militaris was first published in print in an undated edition, probably issued one or two years later in 1473 or 1474 by Nicolaus Ketelaer and Gerardus de Leempt in Utrecht. Their edition had no illustrations. ISTC no. iv00104000.