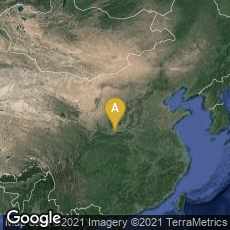 About 215 BCE Qin Shi Huang (秦始皇; pinyin: Qín Shǐhuáng; Wade-Giles: Ch'in Shih-huang) (Ying Zheng) the first Emperor of China, who ruled a unified China from 221 BCE to his death in 210 BCE at the age of 50, ordered construction of the Terracotta Warriers and Horses, otherwise known as the Terracotta Army, near Xi'an, Shaanxi province, ostensibly to help him rule in the afterlife from his vast mausoleum. Varying in height from 183 to 195 cm (6ft–6ft 5in), according to their role, with generals being tallest, the terracotta figures include warriors, chariots, horses, officials, acrobats, strongmen, and musicians. It has been estimated that in the three pits containing the Terracotta Army there were over 8,000 soldiers, 130 chariots with 520 horses and 150 cavalry horses, the majority of which are still buried in the pits.

Creation of this vast collection of painted statuary involved one of the earliest implementations of assembly line production:

"The terracotta figures were manufactured both in workshops by government laborers and also by local craftsmen. The head, arms, legs and torsos were created separately and then assembled. Studies show that eight face moulds were most likely used, and then clay was added to provide individual facial features. Once assembled, intricate features such as facial expressions were added. It is believed that their legs were made in much the same way that terracotta drainage pipes were manufactured at the time. This would make it an assembly line production, with specific parts manufactured and assembled after being fired, as opposed to crafting one solid piece of terracotta and subsequently firing it. In those days, each workshop was required to inscribe its name on items produced to ensure quality control. This has aided modern historians in verifying that workshops that once made tiles and other mundane items were commandeered to work on the terracotta army. Upon completion, the terracotta figures were placed in the pits in precise military formation according to rank and duty" (Wikipedia article on Terracotta Army, accessed 06-01-2009).

"Qin Shi Huang remains a controversial figure in Chinese history. After unifying China, he and his chief adviser Li Si passed a series of major economic and political reforms. He undertook gigantic projects, including the first version of the Great Wall of China, the now famous city-sized mausoleum guarded by a life-sized Terracotta Army, and a massive national road system, all at the expense of numerous lives. To ensure stability, Qin Shi Huang outlawed and burned many books. Despite the tyranny of his autocratic rule, Qin Shi Huang is regarded as a pivotal figure" (Wikipedia article on Qin Shi Huang, accessed 12-30-2009).

♦ The Emperor and the Assassin, a Chinese film directed by Chen Kaige based on a screenplay by Wang Peigong and Chen Kaige, depicted the life of Ying Zheng.