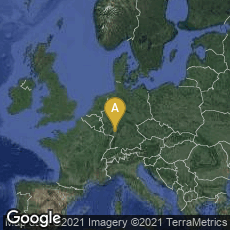 Image Source: en.wikipedia.org
Engine of the first Patent Motorwagen, presumably from the replica.

In 1885 German engine designer and automobile engineer of Mannheim Karl Benz designed the Benz Patent Motorwagon, the first automobile designed to generate its own power, not work as a motorized stage coach or horse carriage.

"The Benz Patent Motorwagen was a three-wheeled automobile with a rear-mounted engine. The vehicle contained many new inventions. It was constructed of steel tubing with woodwork panels. The steel-spoked wheels and solid rubber tires were Benz's own design. Steering was by way of a toothed rack that pivoted the unsprung front wheel. Fully-elliptic springs were used at the back along with a live axle and chain drive on both sides. A simple belt system served as a single-speed transmission, varying torque between an open disc and drive disc.

"The first Motorwagen used the Benz 954 cc single-cylinder four-stroke engine. This new engine produced ⅔ hp (½ kW) at 250 rpm in the Patent Motorwagen, although later tests by the University of Mannheim showed it to be capable of .9 hp (0.7 kW) at 400 rpm. It was an extremely light engine for the time, weighing about 100 kg (220 lb). Although its open crankcase and drip oiling system would be alien to a modern mechanic, its use of a pushrod-operated poppet valve for exhaust would be quite familiar. A large horizontal flywheel stabilized the single-cylinder engine's power output. An evaporative carburettor was controlled by a sleeve valve to regulate power and engine speed" (http://en.wikipedia.org/wiki/Benz_Patent_Motorwagen, accessed 06-01-2009).

"The 1885 version was difficult to control, leading to a collision with a wall during a public demonstration. The first successful tests on public roads were carried out in the early summer of 1886. The next year Benz created the Motorwagen Model 2 which had several modifications, and in 1887, the definitive Model 3 with wooden wheels was introduced, showing at the Paris Expo the same year" (Wikipedia article on Karl Benz, accessed 06-01-2009).