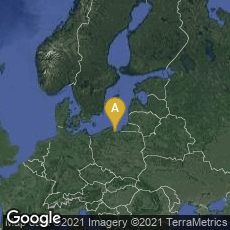 The result of four years of observations, Selenographia was the first comprehensive atlas of the moon. The first state of the book does not contain the plate RRR, which is not called for in the plate list. Hevelius kept adding to his book as it went through the press; probably some copies were already in circulation by the time he had drawn and engraved plate RRR.

Son of a prosperous brewery owner, Hevelius made his own instruments, made his own drawings, did his own engraving, published his own books, and built the best observatory in Europe on beer proceeds. In the Selenographia he drew excellent moon maps, based on his own observations, and gave many new names to the features observable on the moon's surface such as seas, mountains, craters, borrowing nomenclature from terrestrial geography. For example he named an island of Sicily complete with a Mount Etna, and an island of Corsica, both in the Mediterranean Sea. A few of these names—the Alps, the Apennines, and the Caucasus—remain in use, but most of Hevelius's' nomenclature was superceded in the seventeenth century by that of Giovanni Battista Riccioli.

Even more significant was his drawing of the moon in different states of libration; his descriptions of a librational cycle of shadow changes in the lunar details, his method of judging the libration by means of changes in apparent (telescopic) separation of a pair of lunar details, and his introduction of rudimentary lunar coordinate systems provided a sound basis for the work of subsequent astronomers. He also described a mounted lunar globe, perhaps the first of its kind, which allowed representation of librational movements.

The first part of the Selenographia is valuable for the history of optics. Hevelius describes an optical lathe for turning telescope lenses and gives methods for judging the parameters and qualities of lenses. He describes Christoph Scheiner's helioscope, which he eventually modified, the microscope and the military periscope. He illustrates telescopes that he made, which often had unusual fittings and complimentary devices. Hevelius also made observations of Saturn, the satellites of Jupiter, sunspots, comets and the star which he named "Mira."