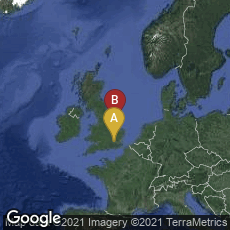 The Forme of Cury, One of the Oldest Known Manuscripts on Cookery in English The Forme of Cury, a vellum scroll in the British Library thought to have been written by the master-cooks of Richard II, and one of the oldest known manuscripts on cookery in the English Language, contains 196 recipes. The word 'cury' is the Middle English word for 'cookery'. The scroll was first published by the vicar and antiquary Samuel Pegge in 1780 as The Forme of Cury, a Roll of Ancient English Cookery, Compiled, about A.D. 1390, by the Master-Cooks of King Richard II, Presented Afterward to Queen Elizabeth by Edward Lord Stafford, and Now in the Possession of Gustavus Brander, Esq. Illustrated with Notes, and a Copious Index or Glossary.  The manuscript scroll is preserved in the British Library.

"The preamble to the manuscript explains that the work has been given the 'assent and avysement of Maisters and phisik and of philosophie at dwelled in his court.' ('approval and consent of the masters of medicine and of philosophy that dwelt in his (Richard II's) court.') This proud acknowledgement illustrates the ancient link between medicine and the culinary arts.

"The author states that the recipes are intended to teach a cook to make everyday dishes ('Common pottages and common meats for the household, as they should be made, craftily and wholesomely'), as well as unusually spiced and spectacular dishes for banquets ('curious potages and meetes and sotiltees for alle maner of States bothe hye and lowe.') The word 'sotiltee' (or subtlety) refers to the elaborate sculptures that often adorned the tables at grand feasts. These displays, usually made of sugar, paste, jelly or wax, depicted magnificent objects: armed ships, buildings with vanes and towers, eagles. They were also known as 'warners,' as they were served at the beginning of a banquet to 'warn' (or notify) the guests of the approaching dinner.

"The Forme of Cury is the first English text to mention olive oil, cloves, mace and gourds in relation to British food. Most of the recipes contain what were then luxurious and valuable spices: caraway, nutmeg, cardamom, ginger and pepper. There are also recipes for cooking strange and exotic animals, such as whales, cranes, curlews, herons, seals and porpoises" (http://www.bl.uk/learning/langlit/booksforcooks/med/pygghome/sawge.html, accessed 06-06-2009).

♦On December 2, 2009 the MailOnline reported that another manuscript of The Forme of Cury from apparently about the same time, but in codex form, was discovered in the John Rylands Library at Manchester University. The article describes the efforts at Manchester to prepare some of the recipes in that manuscript, and how some of the dishes looked and tasted after they were prepared.