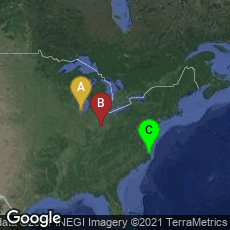 In 1901 American inventor Wilbur Wright of Dayton, Ohio published "Some aeronautical experiments," Journal of the Western Society of Engineers 6 (1901) 489-510. This speech, delivered at the Western Society of Engineers in Chicago on September 18, 1901, was the Wright brothers' first publication on aeronautics, and the work which first made their experiments with motorless gliders known to the world. Wilbur Wright's paper, illustrated with photographs, described the brothers' progress over three seasons of glider flight, including their work from 1900 and 1901 at Kitty Hawk, North Carolina, during which they began to master the art of flight control and they solved the problem of wing warp drag by the addition of a vertical rear rudder.

Wright made this address to the Western Society of Engineers at the urging of engineer Octave Chanute, who was to a large degree responsible for encouraging the brothers' early work. The paper is prefaced by some remarks by Chanute, discussing the possibility of motorized flight using a new lightweight steam or gas engine.

From October to December 1901 the Wrights built a six-foot wind tunnel in their shop and conducted systematic tests on miniature wings.

"The 'balances' they devised and mounted inside the tunnel to hold the wings looked crude, made of bicycle spokes and scrap metal, but were 'as critical to the ultimate success of the Wright brothers as were the gliders.' The devices allowed the brothers to balance lift against drag and accurately calculate the performance of each wing. They could also see which wings worked well as they looked through the viewing window in the top of the tunnel."

". . . The Wrights took a huge step forward and made basic wind tunnel tests on 200 wings of many shapes and airfoil curves, followed by detailed tests on 38 of them. The tests, according to biographer Howard, 'were the most crucial and fruitful aeronautical experiments ever conducted in so short a time with so few materials and at so little expense'. An important discovery was the benefit of longer narrower wings: in aeronautical terms, wings with a larger aspect ratio (wingspan divided by chord—the wing's front-to-back dimension). Such shapes offered much better lift-to-drag ratio than the broader wings the brothers had tried so far.

"With this knowledge, and a more accurate Smeaton number, the Wrights designed their 1902 glider. Using another crucial discovery from the wind tunnel, they made the airfoil flatter, reducing the camber (the depth of the wing's curvature divided by its chord). The 1901 wings had significantly greater curvature, a highly inefficient feature the Wrights copied directly from Lilienthal. Fully confident in their new wind tunnel results, the Wrights discarded Lilienthal's data, now basing their designs on their own calculations.

"With characteristic caution, the brothers first flew the 1902 glider as an unmanned kite, as they had done with their two previous versions. Rewarding their wind tunnel work, the glider produced the expected lift. It also had a new structural feature: a fixed, rear vertical rudder, which the brothers hoped would eliminate turning problems. By 1902 they realized that wing-warping created 'differential drag' at the wingtips. Greater lift at one end of the wing also increased drag, which slowed that end of the wing, making the aircraft swivel—or yaw—so the nose pointed away from the turn. That was how the tailless 1901 glider behaved.

The improved wing design enabled consistently longer glides, and the rear rudder prevented adverse yaw—so effectively that it introduced a new problem. Sometimes when the pilot attempted to level off from a turn, the glider failed to respond to corrective wing-warping and persisted into a tighter turn. The glider would slide toward the lower wing, which hit the ground, spinning the aircraft around. The Wrights called this 'well digging'. Orville apparently visualized that the fixed rudder resisted the effect of corrective wing-warping when attempting to level off from a turn. He wrote in his diary that on the night of October 2, 'I studied out a new vertical rudder'. The brothers then decided to make the rear rudder movable to solve the problem. They hinged the rudder and connected it to the pilot's warping 'cradle', so a single movement by the pilot simultaneously controlled wing-warping and rudder deflection. Tests while gliding proved that the trailing edge of the rudder should be turned away from whichever end of the wings had more drag (and lift) due to warping. The opposing pressure produced by turning the rudder enabled corrective wing-warping to reliably restore level flight after a turn or a wind disturbance. Furthermore, when the glider banked into a turn, rudder pressure overcame the effect of differential drag and pointed the nose of the aircraft in the direction of the turn, eliminating adverse yaw.

"In short, the Wrights discovered the true purpose of the movable vertical rudder. Its role was not to change the direction of flight, but rather, to aim or align the aircraft correctly during banking turns and when leveling off from turns and wind disturbances. The actual turn—the change in direction—was done with roll control using wing-warping. The principles remained the same when ailerons superseded wing-warping.

"With their new method the Wrights achieved true control in turns for the first time on October 8, 1902, a major milestone. During September and October they made between 700 and 1,000 glides, the longest lasting 26 seconds and covering 622.5 feet (189.7 m). Hundreds of well-controlled glides after they made the rudder steerable convinced them they were ready to build a powered flying machine. Thus did three-axis control evolve: wing-warping for roll (lateral motion), forward elevator for pitch (up and down) and rear rudder for yaw (side to side).

"On March 23, 1903, the Wrights applied for their famous patent for a 'Flying Machine', based on their successful 1902 glider. Some aviation historians believe that applying the system of three-axis flight control on the 1902 glider was equal to, or even more significant, than the addition of power to the 1903 Flyer. Peter Jakab of the Smithsonian asserts that perfection of the 1902 glider essentially represents invention of the airplane" (Wikipedia article on Wright Brothers, accessed 12-19-2009).

♦ On June 24, 1903 Wilbur Wright delivered a second paper at the Western Society of Engineers entitled "Experiments and Observations in Soaring Flight." This paper, illustrated with photographs, was published in the Journal of the Western Society of Engineers VIII (1903) 400-417. It contained a summary of their work leading up to the patent application. During the question session after the paper Wilbur stated that "We have not applied a motor to any of machines. The driving force has been gravity." (p. 415).

Of the work described in their second paper Wilbur later testified in 1912:

Upon returning to Kitty Hawk, the Wrights built their first motorized flyer, the Wright Flyer 1. Wilbur made the first unsuccessful attempt to fly it on December 14, 1903. On December 17th they made the first "sustained and controlled heavier-than-air powered flight"over the Kill Devil Hills (852 feet in 59 seconds). During the two following years the Wrights developed their flying machine into the first practical fixed wing aircraft. But until their patent was granted they made no public demonstration of motorized flight and published nothing further about their invention.

♦ The Wrights were granted patent 821,393 for their "Flying-Machine" on May 22, 1906. The patent described their method of three-axis control.

"The patent illustrates a non-powered flying machine—namely, the 1902 glider. The patent's importance lies in its claim of a new and useful method of controlling a flying machine, powered or not. The technique of wing-warping is described, but the patent explicitly states that other methods instead of wing-warping could be used for adjusting the outer portions of a machine's wings to different angles on the right and left sides to achieve lateral (roll) control. The concept of varying the angle presented to the air near the wingtips, by any suitable method, is central to the patent. The patent also describes the steerable rear vertical rudder and its innovative use in combination with wing-warping, enabling the airplane to make a coordinated turn, a technique that prevents hazardous adverse yaw, the problem Wilbur had when trying to turn the 1901 glider. Finally, the patent describes the forward elevator, used for ascending and descending" (Wikipedia article on Wright Brothers, accessed 12-19-2009).