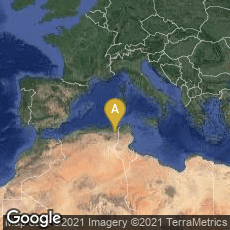 The Latin herbal associated with the name of Apuleius Barbarus or Apuleius Platonicus or Pseudo-Apuleius, in distinction to Lucius Apuleius Platonicus, author of The Golden Ass, may have been put together from Greek material around 400 CE or might have been compiled earlier, possibly in Roman Africa. Nothing is known about the so-called author except his name, which may have actually been a pseudonym of Lucius Apuleius Platonicus, who described himself as "half-Numidian half-Gaetulian," and who was born in Madaurus (now M'Daourouch, Algeria), a Roman colony in Numidia on the North African coast, bordering Gaetulia.

"The history of the work has been lost with the passage of time, leading to endless speculation on the identity of the author. In all probability 'Apuleius Platonicus' was a pseudonym of Lucius Apuleius of Madaura in Numidia born AD124, [author of The Golden Ass,] while other writers refer to the him as Pseudo-Apuleius. A study of the book shows some of the plants being endemic to North Africa and lends support to the idea that the author was African" (Wikipedia article on Herbarium Apulei Platonici, accessed 06-13-2009).

The earliest surviving manuscript of this herbal, a codex containing a Latin herbarium and other medical texts, was produced in Southern Italy or Southern France in the sixth or early seventh century. It is preserved in the library of Universiteit Leiden, Vos. Lat. Q9.

"Its figures are much inferior those of the Vienna Dioscorides, and, like them, derivative, though of different origin; it is, therefore, in spite of being denounced by Singer as 'a futile work, with its unrecognisable figures and incomprehensible vocabulary', and by Frank J. Anderson as a 'straw desperately grasped at by despairing men', in its way a landmark in the history both of botany and of botanical illustration. It was probably written in the south of France and for many generations was unhappily to provide western illustrators from Italy to the Rhine with a storehouse for plunder " (Blunt & Raphael, The Illustrated Herbal [1979] 28).

The Herbarium Apulei was one of the most widely used remedy books of the Middle Ages. Over 60 medieval manuscripts of the text survive.