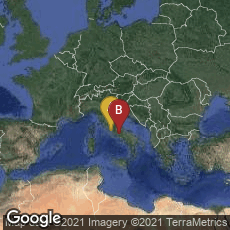 Detail of page from Herbarium apulei with illustration of herb.  Please click to view entire image.

The first printed herbal with illustrations was an illustrated edition of the Herbarium Apulei by Apuleius Platonicus or Pseudo-Apuleius, originally compiled circa 400 CE or earlier, and issued in Rome by the printer and diplomat Johannes Philippus de Lignamine in 1481 or 1482. The earliest surviving manuscript of this text dates from the sixth century.

In his dedicatory letter Lignamine stated that he based his edition on a manuscript found in the Abbey of Monte Cassino. In the 1930s F.W.T. Hunger identified a 9th century manuscript as Lignamine's source (codex Casinensis 97 saec.IX). This he published in facsimile as The Herbal of Pseudo-Apuleius (1935). Regrettably the manuscript was destroyed in the bombardment of Monte Casino in 1944.

The first printed edition of Herbarium Apulei contains in addition to its text, a title within a woodcut wreath and 131 woodcuts of plants, including repeats.  It gives a multitude of prescriptions, and to make the work more useful, lists synonyms for each plant in Greek, Persian, Egyptian, and other languages, illustrating each with a stylized woodcut. These are the earliest series of printed botanical illustrations, and probably the first formal series of illustrations on a scientific subject, though they were preceded by the technological woodcuts in Valturio's De re militari, 1472.  As a practical and instructive reinforcement of the value of particular plants snakes, scorpions, and other venomous animals are depicted in the woodcuts of plants that provide relevant antedotes.

Lignamine sought patronage of his editions through the rich and powerful. As a result, two variant issues of the first edition exist with no priority established:

• one with a dedicatory letter to Cardinal Francesco Gonzaga

• another with a dedication to Giuliano della Rovere, future Pope Julius II.

In February 2013 a digital facsimile of the issue with the dedication to Cardinal Gonzaga was available from the Bayerische Staatsbibliothek at this link.