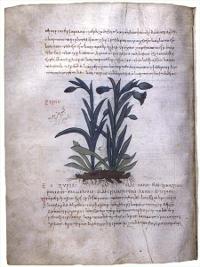 MS M 652 in the Morgan Library & Museum, written in Greek miniscule and illuminated in Constantinople during the mid-10th century, contains an alphabetical five-book version of Dioscorides, De Materia Medica, including 769 illustrations and several headpieces and tailpieces, on 385 leaves.

Its contents, according to the Morgan Library's online description, are:

The manuscript was bound in Byzantium in the 14th or 15th century in dark brown leather blind tooled in a lozenge pattern over heavy boards. It was in Constantinople in the 15th century, where it was owned by an Arabic-speaking person, who added inscriptions in Arabic and genitalia to some animals. In the 16th century it remained in Constantinople where was owned by Manuel Eugenicos, 1578 and listed in his library catalogue. By the nineteenth century the manuscript was in Italy where it was owned by Domenico Sestini, ca. 1820. Later it was in the collection of Marchese C. Rinuccini, Florence, 1820-1849 (MS Cod. 69). From the middle of the nineteenth century it appears to have been in England with the booksellers John Thomas Payne and Henry Foss, London, 1849-1857. In the Payne sale (London, Sotheby’s, Apr. 30, 1857) it was sold to Charles Phillipps for Sir Thomas Phillipps (Phillipps Collection, no. 21975).  In 1920 J. P. Morgan Jr. purchased the manuscript from Phillipps’s estate.