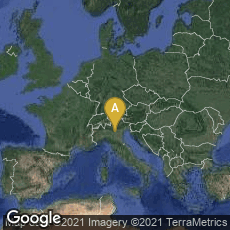 The Veronese Riddle, the Earliest Known Sample of an Early Italian Language Image Source: www.litteravisigothica.com
A page from Verona Orational preserved in the Biblioteca Capitolare di Verona containing the Veronese Riddle. The black & white drawing on the right is a legible version of the faded design drawn on the leaf of vellum.

The growth of a written vernacular allowed the development of a written culture outside the religious orders. The Indovinello versonese or Veronese Riddle, a riddle, apparently half-Italian, half-Latin, written on the margin of the Verona Orational (also known as the Libellus Orationum), probably in the late eighth or early ninth century by a monk from Verona—a city in the Veneto region in Northern Italy— contains the first written sample of an early Italian language different from Late Latin.

"It is written in northern-Italian cursive minuscule. . . : 'Se pareba boves, alba pratalia araba, albo versorio teneba, negro semen seminaba', which can be translated more or less as 'In front of him (he) led oxen, White fields (he) plowed, A white plow (he) held , A black seed (he) sowed'. This can be easily interpreted as a representation of the act of holding a pen and writing on a white sheet." (Wikipedia article on Verona Orational, accessed 01-22-2012).

"Many more European documents seem to confirm that the distinctive traits of Romance languages occurred all around the same time (e.g. France's Serments de Strasburg). Though initially hailed as the earliest document in Italian in the first years following Schiapparelli's discovery, today the record has been disputed by many scholars from Migliorini to Segre and Bruni, who have placed it at the latest stage of Vulgar Latin, though this very term is far from being clear-cut and Migliorini himself considers it dilapidated. At present, however, the Placito Capuano (960 A.D.) (the first in a series of four documents dating 960-963 A.D. issued by a Capuan court) is considered to be the first document ever written in Italian, although Migliorini concedes that since the Placito was put on record as an official court proceeding (and signed by a notary), Italian must have been widely spoken for at least one century" (Wikipedia article on Veronese Riddle, accessed 06-22-2009).