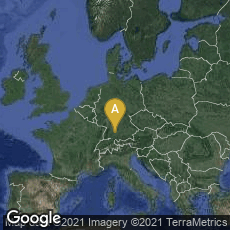 A bone flute with five finger holes, carved from the hollow bone of a gryphon (griffon) vulture, and found in 2009 at Hohle Fels Cave in the hills west of Ulm, Germany, is the most complete of the musical instruments so far recovered from the caves in the region. A three-hole flute carved from mammoth ivory was uncovered from another cave in the area, as well as two flutes made from the wing bones of a mute swan.

"In an article published online by the journal Nature, Nicholas J. Conard of the University of Tübingen, in Germany, and colleagues wrote, 'These finds demonstrate the presence of a well-established musical tradition at the time when modern humans colonized Europe.'

"Although radiocarbon dates earlier than 30,000 years ago can be imprecise, samples from the bones and associated material were tested independently by two laboratories, in England and Germany, using different methods. Scientists said the data agreed on ages of at least 35,000 years old.

"Dr. Conard, a professor of archaeology, said in an e-mail message from Germany that 'the new flutes must be very close to 40,000 calendar years old and certainly date to the initial settlement of the region.'

"Dr. Conard’s team said that an abundance of stone and ivory artifacts, flint-knapping debris and bones of hunted animals were found in the sediments with the flutes. Many people appeared to have lived and worked there soon after their arrival in Europe, assumed to be around 40,000 years ago and 10,000 years before the native Neanderthals were to become extinct" (http://www.nytimes.com/2009/06/25/science/25flute.html?scp=1&sq=nicholas%20j%20conard&st=cse).

You can listen to a melody played on a replica of a prehistoric flute at The New York Times link.