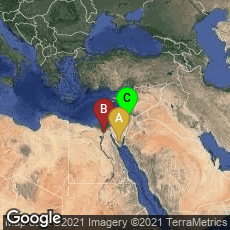 A leaf from the Codex Climaci Rescriptus in the Green Collection.

The Codex Climaci Rescriptus, a 7-8th century Greek uncial manuscript of the New Testament as well as a 6th century Christian Palestinian Aramaic uncial manuscript of the Old and New Testament, represents in its Christian Palestinian Aramaic version of the New Testament, "the closest surviving witness to the words of Jesus Christ. It preserves the Gospels in the nearest dialect of Aramaic to that which he spoke himself, and unlike all other translations, those here were composed with a living Aramaic tradition based in the Holy Land."

The palimpsest-manuscript in Christian Palestinian Aramaic was probably written in Judea, the mountainous southern region of Israel, in the sixth century. It was turned upside down and palimpsested in Syriac in the ninth century. It is thought that it passed to St. Catherine's Monastery in Sinai, which was built by the Emperor Justinian I between 527 and 565.

"acquired by the pioneering Biblical scholars and twins, Agnes Smith Lewis (1843-1926) and Margaret Dunlop Gibson (1843-1920) in three stages between 1895 and 1906 (all in the vicinity of Cairo, the manuscript having presumably been 'liberated' from its monastic home in order to supply leaves for the antiquity trade there). They were staunch Scottish Presbyterians with a consuming interest in the early versions of the Bible, and profound belief in female education, in an age when it practically did not exist. They used their own fortune to become celebrated scholars in the fields of Greek, Latin, Hebrew and Syriac, and thrilled by Tischendorf's discoveries at Sinai, they set off to St. Catherine's on a 'manuscript-hunting' expedition in 1892. They won over the difficult patriarch, partly through their insistence that nothing was to be abstracted from the library there, but only photographs taken, and on that expedition they returned with pictures of the Syriac manuscript which would make them famous, the fourth century Syriac Sinaiticus (their lives and its discovery are the subject of a recent book, J. Soskic, Sisters of Sinai, 2009, which was adapted for BBC Radio 4 this April). Having returned home to Cambridge they were tipped off by a mysterious informant that spectacular manuscripts were to be had through various dealers in Cairo. This was quite different from the questionable removal of manuscripts from ancient libraries, and the twins regarded it as a rescue mission, returning to Egypt and acquiring a single leaf of the present codex . . . in 1895. They acquired a further 89 leaves from the present manuscript in October 1905, and in April of the following year, while passing through Port Tewfik, Agnes Lewis bought two palimpsest - manuscripts on a whim. Upon returning home she discovered that one contained another 48 leaves of the present manuscript, and that the two portions were separated by only a single leaf - that which the twins had acquired first in 1895. They published the entire text in 1909. Only one other leaf of this scattered manuscript has emerged in the last century. . . . On the death of the twins the manuscript was left to Westminster College, Cambridge."

♦ Westminster College consigned the Codex Climaci Rescriptus to auction at Sotheby's London for sale on July 7, 2009 with an estimate of £400,000- £600,000. The quotations in this note were taken from Christopher de Hamel's much longer illustrated description of the manuscript as lot 14 in the catalogue of Sotheby's sale L09740, Western Manuscripts and Miniatures. According to Sotheby's website, the manuscript failed to sell in the auction. In June 2010 it was publicized that the Green family, owners of the Hobby Lobby chain of craft stores, bought the manuscript for their planned Bible museum that was later opened in Washington, D.C.