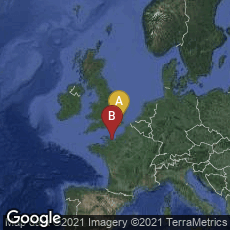 The Norman Conquest Recorded on the Bayeux Tapestry

The Bayeux Tapestry, an embroidery roughly 70 meters long, was produced in England, possibly in Canterbury, commemorating events leading up to and after the Battle of Hastings.

"The tapestry has text in Latin describing what is happening in the scenes. This work of art includes 623 humans, 202 horses, 41 ships, 2000 Latin words and 8 different colors of yarn." 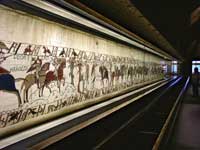 "The tapestry was most likely first put on display in the Cathedral of Notre Dame [in Bayeux] built by Bishop Odo in 1077. Then, no mention of it is found for the next 300 years. Then, it was mentioned in 1750 when it was referred to in a book by the name of Palaeographia Britannicus. Soon afterward, the people of Bayeux, who were fighting for the Republic, needed cloth to cover their wagons. As such, the tapestry was removed from the cathedral and used to cover an ammunition wagon. A lawyer saved the tapestry by replacing it with another cloth. In 1803 Napoleon seized it and transported it to Paris. Napoleon wanted to use the tapestry as inspiration for his planned attack on England. When this plan was cancelled, the tapestry was returned to Bayeux. The townspeople wound the tapestry up and stored it like a scroll. The tapestry spent World War II wound up in the Louvre. Now it is stored in a museum in a dark room with special lighting to avoid damaging it."