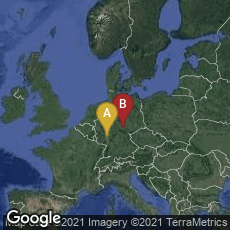 The Bulla Turcorum of Calixtus III, of Which One Copy Survives On June 29, 1456 Pope Calixtus III promulgated the Bulla Turcorum, announcing the conquest of Constantinople by the Ottoman Turks, and seeking funding for another crusade against the Turks, who were advancing into the Balkans.

"A copy of the Bull reached Mainz and was printed by Johann Gutenberg; only the present copy in the Scheide Library survives. A German translation was also printed by Gutenberg. It too survives in only one copy, in the Staatsbibliothek Preussischer Kulturbesitz, Berlin. Although no surviving example of early European printing is signed by Johann Gutenberg, early evidences and reports converge to show that he was the inventor of European typography. In particular, the “DK” (Donatus and Kalendar) type appears to be his first printing type. It was used in part to print the 31-line Cyprus Indulgence, of which the earliest datable copy, executed in Erfurt on 22 October 1454, is in the Scheide Library: this is the first fixed date at which we know that printing was being carried out in Mainz. Several other DK-type fragments, such as the Sibyllenbuch partial leaf at the Gutenberg Museum, Mainz, show a much less finished state of the font, and are plausibly earlier than 1454. In the late 1450s, the DK type was apparently sold to Bamberg, where it was used to print the 36-line Bible (not after 1461), and other books, some of which are signed by Albrecht Pfister. . . .

"Acquired by John H. Scheide from Maggs Bros., London, May 1939. The single gathering of 12 paper leaves was disbound from some unidentified volume; it appears that Maggs acquired the work from some European bookseller without knowing of its earlier survival context. On the first three pages of the two final blank leaves is a densely written tractate concerning crusades and crusading indulgences; it is signed at the end as from the Charterhouse of Erfurt. Unpublished research by Dr. Hope Mayo strongly suggests that the tractate was composed by the Erfurt Carthusian Johannes Indaginis, a prolific writer and determined ecclesiastical reformer. Presumably, therefore, this copy of the Calixtus Bull belonged to the Erfurt Charterhouse. Curiously, the unique Berlin copy of the German printing of the Bull likewise belonged to that convent" (http://diglib.princeton.edu/xquery?_xq=getCollection&_xsl=collection&_pid=whsS2.4-calixtus, accessed 07-10-2009).

A facsimile of all 12 leaves of the Scheide copy is available from Princeton University Library at this link.

Book History from 1452 to 1797
Printing by Handpress or by Hand
Survival of Information / Philology
Collecting Books, Manuscripts, Art, NFTs