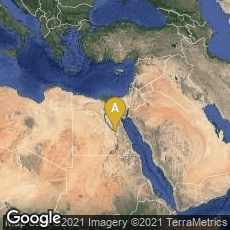 Self-Portrait of an Egyptian Scribe with his Autograph Signature Schøyen Collection MS 1695. Sesh, Hieroglyph of "Scribe". Deir-el-Medicina, Western Thebes, 1307-1070 BCE. The autograph and self portrait of one of the artists who decorated the tombs in the Valley of the Kings and Queens.

A sketch in rust-red drawn on a limestone ostracon represents the self-portrait of the scribe, Sesh, wearing a knee-length kilt, his arms raised to present a papyrus roll and possibly a writing pallette. The sketch is signed with the hieroglyph of "scribe", consisting of a palette with wells for red and black ink, shoulder strap, water pot and reed pen. Measuring 11 x 12 cm, it was created in Deir-el-Medina, Western Thebes, 19th or 20th dynasty, and excavated there, circa 1975. It is preserved in the Schøyen Collection (MS 1695).

Deir-el-Medina was occupied by the community of workmen who constructed and decorated the tombs in the Valley of the Kings and the Valley of the Queens. Many pieces, mostly dating from the 19th and 20th Dynasties were recovered from this site—mostly detailed drafts for specific details of a tomb's decoration.