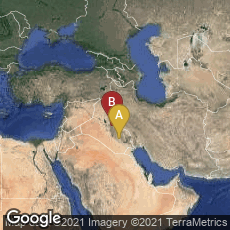 The Warka Vase, One of the Earliest Surviving Works of Narrative Relief Sculpture, Looted in the Iraq War

The Warka Vase, also called the Uruk Vase, a carved alabaster stone vessel, is one of the earliest surviving works of narrative relief sculpture. It was found in the temple complex of the Sumerian goddess Inanna in the ruins of the ancient city of Uruk, located in the modern Al Muthanna Governorate, in southern Iraq.

"The vase was discovered as a collection of fragments by German Assyriologists in their sixth excavation season at Uruk in 1933/1934. The find was recorded as find number W14873 in the expedition's field book under an entry dated 2 January 1934, which read "Großes Gefäß aus Alabaster, ca. 96 cm hoch mit Flachrelief" ("large container of alabaster, circa 96 cm high with flat-reliefs"). The vase, which showed signs of being repaired in antiquity, stood 3 feet, ¼ inches (1 m) tall. Other sources cite it as having been a slightly taller 106cm, with an upper diameter of 36cm. . . .

"The vase has three registers - or tiers - of carving. The bottom register depicts the vegetation in the Tigris and Euphrates delta, such as the natural reeds and cultivated grain. Above this vegetation is a procession of animals, such as oxen and sheep presented in a strict profile view. The procession continues in the second register with nude males carrying bowls and jars of sacrificial elements, such as fruit and grain. The top register is a full scene, rather than a continuous pattern. In this register, the procession ends at the temple area. Inanna, one of the chief goddesses of Mesopotamia and later known as Ishtar in the Akkadian pantheon, stands, signified by two bundles of reeds behind her. She is being offered a bowl of fruit and grain by a nude figure. A figure in ceremonial clothing - presumably a chieftain/priest - stands nearby with the procession approaching him from behind.

"The Warka Vase was one of the thousands of artifacts which were looted from the National Museum of Iraq during the 2003 Invasion of Iraq. In April 2003 it was forcibly wrenched from the case where it was mounted, snapping at the base (the foot of the vase remaining attached to the base of the smashed display case. The vase was later returned during an amnesty to the Iraq Museum on June 12, 2003 by three unidentified men in their early twenties, driving a red Toyota vehicle. As reported by a correspondent for The Times newspaper, “ As they struggled to lift a large object wrapped in a blanket out of the boot, the American guards on the gate raised their weapons. For a moment, a priceless 5,000-year-old vase thought to have been lost in looting after the fall of Baghdad seemed about to meet its end. But one of the men peeled back the blanket to reveal carved alabaster pieces that were clearly something extraordinary. Three feet high and weighing 600lb intact, this was the Sacred Vase of Warka, regarded by experts as one of the most precious of all the treasures taken during looting that shocked the world in the chaos following the fall of Baghdad. Broken in antiquity and stuck together, it was once again in pieces.

"Soon after the vase's return, broken into 14 pieces, it was announced that the vase would be restored. A pair of comparison photographs, released by the Oriental Institute, Chicago, showed significant damage (as of the day of return, 12 June 2003) to the top and bottom of the vessel.

"The current condition of the Warka Vase (museum number IM19606) is not known. In June 2007, The Guardian newspaper reported that widespread looting of antiquities is ongoing in Iraq and that the director of the Iraq Museum, Donny George, fled in August 2006 after receiving death threats. The museum's entrances have been bricked up, the building surrounded by concrete walls, and the museum's staff do not have access" (Wikipedia article on Warka Vase, accessed 07-11-2009).