The Tabularium, Archives of Republican Rome, is Founded 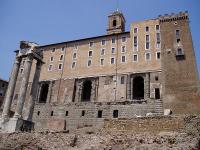 In 87 BCE the archives of Republican Rome, the Tabularium, was constructed within the Forum Romanum.

"Except for a few isolated cases, the general archives is a product of the last two hundred years. Although the Tabularium, the archives of Republican Rome, showed a tendency to absorb records of various administrative orgiins, the idea of concentrating in one place the archives of different creators was alien to ancient and medieval times. The ancient world did not even have the concept of an archivio di deposito, for nowhere are there to be found arrangements revealing an intention to differentiate adminstratively between current records and those no longer regularly needed for the dispatch of business. It was only in the Middle Ages that a discriminating attitude toward the value of records developed. This was expressed in the practice of copying important records in cartularies so as to have them available for frequent use, while the originals were carefully protected in an inner sanctum, as for instance, the Byzantine skeuophylakion. By and large, however, it was the emerging recognition of the research value of records that led to the distinction between records of daily usefulness and others to be preserved because of their long-range importance. 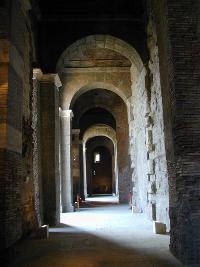 "In the ancient period, this distinction was not made; and this means that by archives we must understand all kinds of records. In fact, the term archives itself may be slightly inappropriate, for even in its broadest meaning the word suggests an intention to keep records in usable order and in premises suitable to that purpose. In the Near East, where great quantities of records have been found on excavation sites, only rarely could any part of the site be identified as an archives room. Most of the time we cannot tell whether we are dealing with an archival aggregate or with a collection of trash, the equivalent of a modern waste-paper basket. And yet we cannot exclude such disjecta membra from our consideration, because they may still reveal a pattern worth discovering. When Bernard P. Grenfell, Arthur S. Hunt, and J. Gilbart Smyly discovered the mummies of the "papyrus enriched" holy crocodiles in Eqyptian Tebtunis, they sensibly decided to include in the first volume of their publication a "classification of papyri according to crocodiles," for papyri in the belly of the same animal might reveal relationships reflecting their administrative provenance and an original arrangement" (Posner, Archives in the Ancient World [1972] 4-5).

♦ In February 2014 a slide show about the Tabularium was available at this link.