The Inca Road System, Used Almost Exclusively by People Walking and by Pack Animals including Llamas The Q'eswachaka bridge, an Inka suspension (catenary) bridge on the Apurimac River near Huinchiri, Peru. This is the last Inka style bridge in Perù. It is rebuilt every 2 years. 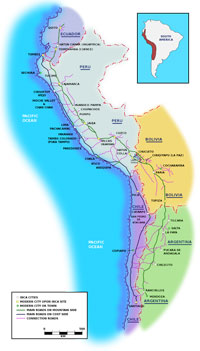 "Among the many roads and trails constructed in pre-Columbian South America, the Inca road system, or Qhapaq Ñan was the most extensive and highly advanced for its time. The network was based on two north-south roads. The eastern route ran high in the puna and mountain valleys from Quito, Ecuador to Mendoza, Argentina. The western route followed the coastal plain except in coastal deserts where it hugged the foothills. More than twenty routes ran over the western mountains, while others traversed the eastern cordilla in the montana and lowlands. Some of these roads reach heights of over 5,000 metres (16,000 ft) above sea level. The trails connected the regions of the Inca empire from the northern provincial capital in Quito, Ecuador past the modern city of Santiago, Chile in the south. The Inca road system linked together about 40,000 km of roadway and provided access to over three million km² of territory.

"These roads provided easy, reliable and quick routes for the Empire's civilian and military communications, personnel movement, and logistical support. The prime users were imperial soldiers, porters and llama caravans, along with the nobility and individuals on official duty. Permission was required before others could walk along the roads, and tolls were charged at some bridges. Although the Inca roads varied greatly in scale, construction and appearance, for the most part they varied between about one and four meters in width.

"Much of the system was the result of the Incas claiming exclusive right over numerous traditional routes, some of which had been built centuries earlier. Many new sections were built or upgraded substantially: through Chile's Atacama desert, and along the western margin of Lake Titicaca, as two examples.

"Spanish chroniclers frequently described lengthy journeys made by the Inca ruler, carried on a litter, and surrounded by thousands of soldiers and retainers, to various parts of his empire.

"Because the Incas did not make use of the wheel for transportation, and did not have horses until the arrival of the Spanish in Peru in the 16th century, the trails were used almost exclusively by people walking, sometimes accompanied by pack animals, usually the llama.

"Relay messengers, or chasqui, stationed at intervals of 6 to 9 km, carried both messages and objects such as fresh marine fish for the rulers in the sierra. Messages consisted of knotted-cord records known as quipu along with a spoken message. Chaskis could cover an estimated 240 km per day.

"There were at least 1,000 and perhaps 2,000 way stations or tambos, placed at even intervals along the trails. These structures were intended to lodge and provision itinerant state personnel.

"Various means were used to bridge water courses. Rafts were used to cross wide meandering rivers. Bridges built of stone or floating reeds were used in marshy highlands. Inca rope bridges provided access across narrow valleys. A bridge across the Apurimac River, west of Cuzco, spanned a distance of 45 meters. Ravines were sometimes crossed by hanging baskets, or oroya, which could span distances of over 50 meters. Bridges were sometimes built in pairs" (Wikipedia article on Inca Road System, accessed 07-24-2009).