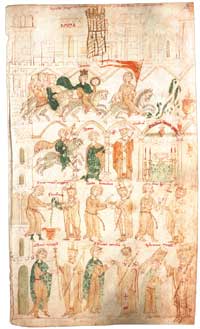 "tells the story of Tancred of Lecce's attempt to take control of Sicily, an attempt thwarted by the successful military campaign of Henry VI, Holy Roman Emperor. Composed in honour of Henry VI and intended for presentation to him, the poem, distributed into three books, the last one being an encomiom [encomium] of Henry VI, and 52 continuously numbered particulae, is written in a mannered and sophisticated style. It is often mocking and extremely biased (see for example part. 4; 7-9; 25f. and the illustrations), but, once allowance has been made for this, is a useful and detailed historical source. It contains much information about Constanze of Sicily, the wife of Henry VI (part. 20ff.), and the birth of her son Frederick II, Holy Roman Emperor (part. 43).

"At every page opening a column of Latin text is faced by a full page illustration with brief captions. This beautiful volume gives a rich picture of 12th century life in Italy and Sicily; it may be compared with the 11th century Bayeux Tapestry. The fierce caricatures of Tancred, who is depicted as almost ape-like in stature and features, match the propagandistic bias of the text" (Wikipedia article on Liber ad honorem Augusti, accessed 07-25-2009).

"Female nurses existed in Salerno from ancient times. Of this we have evident proof from two miniatures in a manuscript of the Carmen in honorem Augusti of Peter of Eboli in the municipal library of Berne . . . . In the first miniature we have a representation of Count Richard of Acerra lying wounded on the walls of a town he has been defending; we can see the doctor trying to extract an arrow which has pierced the jaw while two nurses carry medicaments and dressings. . . In the second an illustration of the death of William II is given; a nurse by the bed is trying to cool the heated air of the sick room by waving a fan" (Capparoni, "Magistri Salernitani Nondum Cogniti". A Contribution to the History of the Medical School of Salerno [1923] 17, frontispiece, and plate II).

Digital facsimile from Burgerbibliothek Bern at this link.