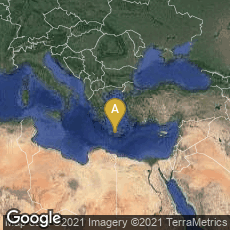 The Phaistos Disc, a disc of fired clay from the Minoan Palace of Phaistos on the island of Crete, was discovered in 1908 by the Italian archaeologist Luigi Pernier, and remains the most famous document found in Crete.

"It is about 15 cm (5.9 in) in diameter and covered on both sides with a spiral of stamped symbols. Its purpose and meaning, and even its original geographical place of manufacture, remain disputed, making it one of the most famous mysteries of archaeology. This unique object is now on display at the archaeological museum of Heraklion in Crete" (Wikipedia article on Phaistos Disc, accessed 07-26-2009).

Because of the unique features of the disc, and the mysteries surrounding its origin, many people have doubted its authenticity, but no one has yet been able to prove conclusively that it is a forgery.

"The disk has the distinction of being the world's first typewritten document. It was made by taking a stamp or punch bearing the sign to be written in a raised pattern, and impressing this on the wet clay. The maker therefore needed to have as many stamps as there were signs in the script. It has the advantage that even complicated signs can be quickly written, and every example of the same sign is identical and easy to read. The disadvantage is that a considerable outlay of time and effort is required to make the set of stamps before any document can be produced. It is therefore evident that the system was not created solely for a single document; its maker must have intended to reproduce a large number of documents, though it remains some way from being an anticipation of printing.

"It is therefore all the more remarkable that after more than eighty years of excavation not another single scrap of clay impressed with these stamps had been found at Phaistos, or at any other site in Crete or elsewhere. It would be very surprising if there were not somewhere more examples of the script waiting to be found, but the disk remains so far unique, and the suspicion must arise that it was an isolated object brought from some other area.

"This impression of foreign origin can be supported by two arguments. The work of cutting the stamps, whether made directly or perhaps more likely by making moulds into which metal was poured, is a technique very similar to gem-engraving. We might therefore expect the signs to bear a stylistic resemblance to those engraved on seal-stones. In fact the style of art is noticeably different. Secondly, some of the objects depicted by the signs have a distinctly foreign appearance to those familiar with Minoan art" (Chadwick, Linear B and Related Scripts  [1987]  57-58).