The cover art for Double Fold : Libraries and the Assault on Paper 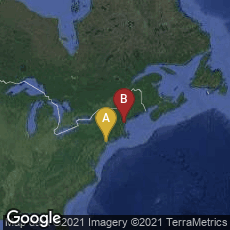 Double Fold: Libraries and the Assault on Paper In April 2001 American writer Nicholson Baker, of South Berwick, Maine, published Double Fold: Libraries and the Assault on Paper. Prior to the book an excerpt appeared in the July 24, 2000 issue of The New Yorker, under the title "Deadline: The Author's Desperate Bid to Save America's Past."

Baker's exhaustively researched polemic detailed his quest to expose the fate of thousands of books and newspapers that were replaced and often destroyed during the microfilming boom of the 1980s and '90s.

"The term 'double fold' refers to the test used by many librarians and preservation administrators to determine the brittleness and 'usability' of paper. The test consists of folding down the corner of a page of a book or newspaper, then folding it back in the opposite direction—one double fold. The action is then repeated until the paper breaks or is about to break. The more folds the page can withstand, the more durable it is. (In the late 1960s, preservation founding father William Barrow was fond of using a machine-run fold tester to back up his claims about the number of endangered books.) This experiment was used by library officials to identify their institution's brittle books, and, in some case, to justify withdrawing items from the shelves or replacing them with another format (most often microfilm). Baker's take on the double-fold test? '...utter horseshit and craziness. A leaf of a book is a semi-pliant mechanism. It was made for non-acute curves, not for origami.' (p. 157)"

"In 1999, Baker took matters into his own hands and founded the American Newspaper Repository in order to save some of the collections being auctioned off by the British Library. A year later he became the owner of thousands of volumes of old newspapers, including various runs of the New York Times, the Chicago Tribune, the New York Herald Tribune, and the New York World. In May 2004 the entire collection was moved to Duke University, where it is stored on climate-controlled shelves and looked after by the Rare Books and Special Collections division. As part of the gift agreement between the American Newspaper Repository and Duke, the collection will kept together in perpetuity, and no disbinding or experimental deacidification will be allowed.

"Baker makes four recommendations in Double Fold's epilogue: that libraries should be required to publish lists of discarded holdings on their websites, that the Library of Congress should fund a building that will serve as a storage repository for publications and documents not housed on-site, that some U.S. libraries should be designated with saving newspapers in bound form, and that both the U.S. Newspaper and the Brittle Books Programs should be abolished, unless they can promise that all conservation procedures will be non-destructive and that originals will be saved" (Wikipedia article on Double Fold, accessed 07-28-2009).