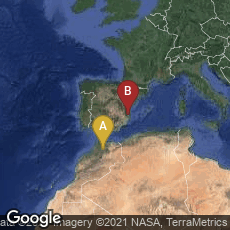 Through the Arab conquest of North Africa and Southern Spain, papermaking first reached the Muslim parts of Spain (Al-Andalus) in the 12th century. A paper mill is recorded at Fez (Fes) in Morocco in 1100, and the first paper mill on the Spanish mainland is recorded at Xàtiva, near Valencia, which was still under Muslim rule, in 1151.

"Paper seems to have advanced less rapidly in Europe than it had advanced either in China or in the Arabic world. The European parchment with which paper had to compete was a far better writing material than either bamboo slips or papyrus. Furthermore, there were few in Europe who read, and the demand for a cheaper writing material, until the advent of printing, was small. While it was the coming of paper that made the invention of printing possible, it was the invention of printing that made the use of paper general. After Europe began to print, first from blocks and then from type, paper quickly took its place as the one material for writing as well as for printing, though, strange to say, the first paper mill in England was not set up until seventeen years after Caxton began to print at Westminster" (Carter, Invention of Printing in China 2nd ed [1955] 137-38).

Printing by Handpress or by Hand
Technology / Engineering
Papermaking by Hand