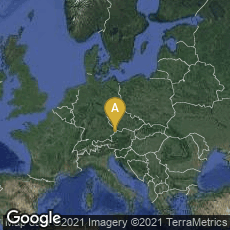 The Song of the Nibelungs 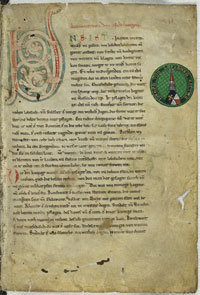 The Nibelungenlied (translated as The Song of the Nibelungs), an epic poem in Middle High German, told of dragon-slayer Siegfried at the court of the Burgundians, how he was murdered, and of his wife Kriemhild's revenge. It was based on pre-Christian Germanic heroic motifs (the "Nibelungensaga"), which included oral traditions and reports based on historic events and individuals from the 5th and 6th centuries.

"The poem in its various written forms was lost by the end of the 16th century, but manuscripts from as early as the 13th century were re-discovered during the 18th century. There are thirty-five known manuscripts of the Nibelungenlied and its variant versions. Eleven of these manuscripts are essentially complete. The oldest version however seems to be the one preserved in manuscript "B". Twenty-four manuscripts are in various fragmentary states of completion, including one version in Dutch (manuscript 'T'). The text contains approximately 2,400 stanzas in 39 Aventiuren. The title under which the poem has been known since its discovery is derived from the final line of one of the three main versions, "hie hât daz mære ein ende: daz ist der Nibelunge liet" ("here the story takes an end: this is the lay of the Nibelungs"). Liet here means lay, tale or epic rather than simply song, as it would in Modern German.

"Prevailing scholarly theories strongly suggest that the written Nibelungenlied is the work of an anonymous poet from the area of the Danube between Passau and Vienna, dating from about 1180 to 1210, possibly at the court of Wolfger von Erla, the bishop of Passau (in office 1191–1204). Most scholars consider it likely that the author was a man of literary and ecclesiastical education at the bishop's court, and that the poem's recipients were the clerics and noblemen at the same court" (Wikipedia article on Nibelungenlied, accessed 08-02-2009).

♦  Digital facsimiles of examples of the A, B, and C sources were available at this link.