Image Source: www.travelingintuscany.com
A photograph of the restored tablet, containing many missing pieces. 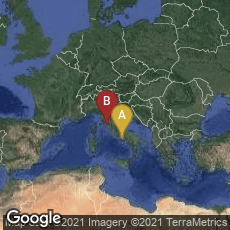 The Marsiliana Tablet Abecedarium, the Earliest Example of Etruscan Writing Image Source: www.elektron2000.com
A drawing of the very small tablet, dimensions of which are only 51 x 89 mm. This was a wax tablet, in which wax would have been kept for notes in the recessed center area, with the preserved alphabet on the upper rim of the tablet.

"The earliest Etruscan abecedarium, the Marsiliana d'Albegna (near Grosseto) tablet which dates to c. 700 BCE, lists 26 letters corresponding to contemporary forms of the Greek alphabet which retained san and qoppa but which had not yet developed omega.

"21 of the 26 archaic Etruscan letters were adopted for Old Latin from the 7th century BCE, either directly from the Cumae alphabet, or via archaic Etruscan forms, compared to the classical Etruscan alphabet retaining B, D, K, O, Q, X but dropping Θ, Ś, Φ, Ψ, F (Etruscan U is Latin V, Etruscan V is Latin F).