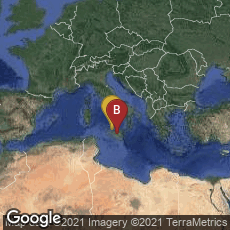 Jeremy Norman Collection of Images -&nbspCreative Commons
Reproduction of what may be the earliest extant European document written on paper made in Europe, from Frugoni, Inventions of the Middle Ages, figure 41.

The earliest extant European document on paper, possibly written on paper manufactured in Europe, comes from the chancellery of the Norman kings who had occupied the island of Sicily. It is an order dated 1109 in Greek and Arabic concerning a salt mine near Castrogiovanni (now Enna) issued by the countess Adelasia, first wife of Roger I of Sicily. The document is preserved in the state archives at Palermo.

Frugoni, Inventions of the Middle Ages (2007) 62, reproducing the document as figure 41.