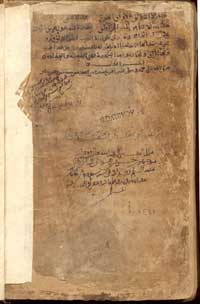 "The oldest dated complete book in Arabic copied on paper that we know is a manuscript dating to 848, recently discovered by accident in the regional library of Alexandria, Egypt; it awaits publication. The second oldest surviving Arabic book on Arabic paper is generally believed to be a fragmentary copy of Abu Ubayd's work on unusual terms in the traditions of the Prophet dated Dhu'l-Qada 252, November—December 867 and preserved in Leiden University Library [Legatum Warnerianum Or. 298]. It bears no indication of where it was copied. The opaque stiff paper has turned dark brown and has a tendency to split along the edges. This feature had led some observers to suggest that the pages of early manuscripts were pasted together, back to back, from two separate sheets made in floating molds, which leave one side rougher than the other and unsuitable for writing. This tendency for the pages to split is actually a result of delamination, a condition seen in many early papers, such as the Vatican manuscript [Doctrina patrum]. When the pulp was not sufficiently beaten, the outer layers of the cellulose fibers did not detach and form physical and chemical bonds with adjacent microfibrils, and the resulting paper has weak internal cohension. The condition was exacerbated when the paper was given a hard surface with the application of size. The weaker interior splits easily in two, revealing a rough, woolly and feltlike inner surface" (Bloom, Paper Before Print. The History and Impact of Paper in the Islamic World [2001] 59-60 and figure 27).