Bodleian Library MS. Marsh 144. 111/435. "Perseus (barshawush, or hamil ra's al-ghul), the bearer of the demon's head. (Constellations of the northern hemisphere). | Al-Sufi's Book of the Fixed Stars, a revision of Ptolemy's Almagest with Arabic star names and drawings of the constellations. Dated 1009-10 (A.H. 400)" 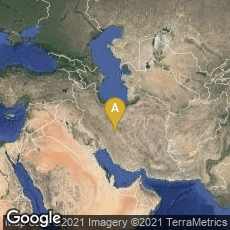 The two oldest illustrated Arabic manuscripts are copies of Abd al-Rahman al-Sufi's Treatise on the Fixed Stars. One of these is preserved in the Bodleian Library, Oxford (Ms. Marsh 144).

"The pictures show the configurations of the stars in the forty-eight constellations recognized by Ptolemy, but the figures are dressed in Oriental rather than classical Greek garb. Al-Sufi wrote in his text that although he knew of another illustrated astronomical treatise, he copied his illustrations directly from images engraved on a celestial globe, indicating that he was not working in a manuscript tradition. According to the eleventh-century scholar al-Biruni, al-Sufi explained that he had laid a very thin piece of paper over a celestial globe and fitted it carefully over the surface of the sphere. He then traced the outlines of the constellations and the locations of individual stars on the paper. Al-Biruni later commented that this procedure 'is an [adequate] approximation when the figures are small but it is far [from adequate] if they are large.' The Oxford manuscript of al-Sufi's text was copied from the author's original by his son" (Bloom, Paper Before Print. The History and Impact of Paper in the Islamic World [2001]  143-44 and figure 51).