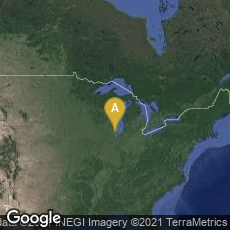 The first prototype of magnetic stripe card made by Forrest Parry and Jerome Svigals of IBM. The prototype was created in 1960's. It is a piece of cardboard the size of credit card, with a magnetic cellophane tape taped to it with transparent adhesive tape.

The first test of magnetic stripe transaction card technology developed by IBM occurred in January 1970 at the American Airlines terminal at Chicago's O'Hare Airport with the Automatic Ticket Vendor.

Though the test at O'Hare Airport was successful, the airline did not implement the technology because of a recession. IBM patented the technology, but did not announce its availability until 1973.