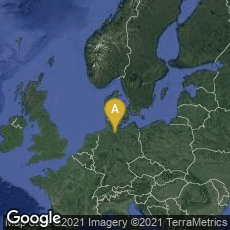 Though Adrien-Marie Legendre was the first to publish the method of least squares in 1805, Carl Friedrich Gauss is credited with developing the fundamentals of the basis for least-squares analysis in 1795 at the age of eighteen.

"An early demonstration of the strength of Gauss's method came when it was used to predict the future location of the newly discovered asteroid Ceres. On January 1, 1801, the Italian astronomer Giuseppe Piazzi discovered Ceres and was able to track its path for 40 days before it was lost in the glare of the sun. Based on this data, it was desired to determine the location of Ceres after it emerged from behind the sun without solving the complicated Kepler's nonlinear equations of planetary motion. The only predictions that successfully allowed Hungarian astronomer Franz Xaver von Zach to relocate Ceres were those performed by the 24-year-old Gauss using least-squares analysis.

"Gauss did not publish the method until 1809, when it appeared [in Hamburg] in volume two of his work on celestial mechanics, Theoria Motus Corporum Coelestium in sectionibus conicis solem ambientium" (Wikipedia article on Least squares, accessed 08-24-2009).