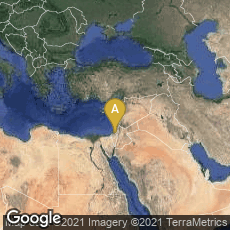 Possibly the Earliest Proto-Canaanite Inscription Was Written on an Ostracon An ostracon shard found in October 2008 about 20 miles southwest of Jerusalem at the Elah Fortress in Khirbet Qeiyafa, the earliest known fortified city of the biblical period of Israel, and written in ink in Proto-Canaanite script, could be the earliest known Hebrew inscription, according to biblical archaeologist Yosef Garfinkel. Other scholars urge caution in accepting that interpretation. The shard is one of only a dozen or so examples of Proto-Canaanite that have survived.

"The Israelites were not the only ones using proto-Canaanite characters, and other scholars suggest it is difficult - perhaps impossible - to conclude the text is Hebrew and not a related tongue spoken in the area at the time. Garfinkel bases his identification on a three-letter verb from the inscription meaning to do, a word he said existed only in Hebrew.

" 'That leads us to believe that this is Hebrew, and that this is the oldest Hebrew inscription that has been found,' he said.

"Other prominent Biblical archaeologists warned against jumping to conclusions.

"Hebrew University archaeologist Amihai Mazar said the inscription was very important, as it is the longest proto-Canaanite text ever found. But he suggested that calling the text Hebrew might be going too far" (http://www.haaretz.com/hasen/spages/1032929.html,accessed 08-30-2009).